Corn flakes, or cornflakes, are a popular breakfast cereal made by toasting flakes of corn. The cereal was first created by John Harvey Kellogg in 1894 as a food that he thought would be healthy for the patients of the Battle Creek Sanitarium in Michigan where he was superintendent. The breakfast cereal proved popular among the patients and the Kellogg Company (Kellogg's) was set up to produce corn flakes for the wider public. A patent for the process was granted in 1896.

With corn flakes becoming popular in the wider community, a previous patient at the sanitarium, C. W. Post, started to make rival products. Kellogg continued to experiment and various ingredients were added and different grains were used. In 1928, he started to manufacture Rice Krispies, another successful breakfast cereal.

There are many generic brands of corn flakes produced by various manufacturers. As well as being used as a breakfast cereal, the crushed flakes can be a substitute for bread crumbs in recipes and can be incorporated into many cooked dishes.

Corn flakes are a packaged cereal product formed from small toasted flakes of corn, usually served cold with milk and sometimes sugar. Since their original production, the plain flakes of corn have been flavoured with salt, sugar and malt, and many successive products with additional ingredients have been manufactured such as sugar frosted flakes and honey & nut corn flakes. Corn flakes are produced in significant quantities at the Trafford Park factory in Manchester, England, which is the largest cereal factory in the world. 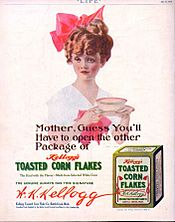 Advertisement for Kellogg's Toasted Corn Flakes from the July 21, 1910 issue of Life magazine

The legend of corn flakes goes back to the late 19th century, when a team of Seventh-day Adventists began to develop new foods to adhere to the vegetarian diet recommended by the church. Members of the group experimented with a number of different grains, including wheat, oats, rice, barley and corn.

In 1894, John Harvey Kellogg, the superintendent of the Battle Creek Sanitarium in Michigan and an Adventist, used these recipes as part of a strict vegetarian regimen for his patients, which also included no alcohol, tobacco or caffeine. The diet he imposed consisted entirely of bland foods. 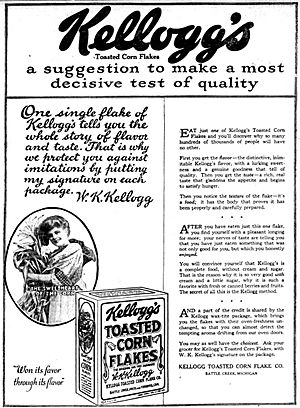 A newspaper advertisement for Kellogg's Toasted Corn Flakes in 1919

This idea for corn flakes began by accident when Kellogg and his younger brother, Will Keith Kellogg, left some cooked wheat to sit while they attended to some pressing matters at the sanitarium. When they returned, they found that the wheat had gone stale, but being on a strict budget, they decided to continue to process it by forcing it through rollers, hoping to obtain long sheets of the dough. To their surprise, what they found instead were flakes, which they toasted and served to their patients. This event occurred on August 8, 1894, and a patent for "Flaked Cereals and Process of Preparing Same" was filed on May 31, 1895, and issued on April 14, 1896.

The flakes of grain, which the Kellogg brothers called granose, were a very popular food among the patients. The brothers then experimented with other flakes from other grains. In 1906, Will Keith Kellogg, who served as the business manager of the sanitarium, decided to try to mass-market the new food. At his new company, Battle Creek Toasted Corn Flake Company, he added sugar to the flakes to make them more palatable to a mass audience.

At the same time, Kellogg also began experimenting with new grain cereals to expand his product line. Rice Krispies, his next great hit, first went on sale in 1928.

There have been many mascots of Kellogg's Cornflakes. The most popular one is a green rooster named Cornelius "Corny" Rooster, which has been the mascot since his debut. In early commercials, he would speak the catch phrase "Wake up, up, up to Kellogg's Cornflakes!" Dallas McKennon and Andy Devine voiced him. Later, he stopped talking and simply crowed.

The concept of using a stylized cockerel originated from a suggestion by family friend from Wales and a Welsh language proponent. The Welsh word for cockerel is ceiliog (pronounced keyeleeog or in some dialects keelog). 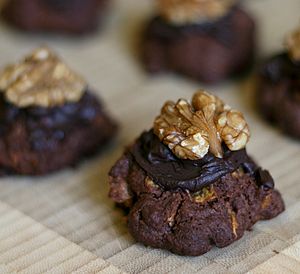 There are a wide variety of different recipes for dishes involving corn flakes and crushed corn flakes can even be a substitute for bread crumbs.

All content from Kiddle encyclopedia articles (including the article images and facts) can be freely used under Attribution-ShareAlike license, unless stated otherwise. Cite this article:
Corn flakes Facts for Kids. Kiddle Encyclopedia.