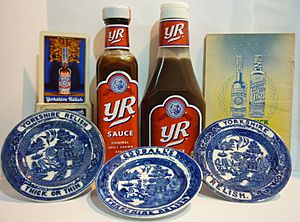 Brown sauce is a condiment served with food in the United Kingdom and Ireland, normally dark brown in colour. The ingredients include a varying combination of tomatoes, molasses, dates, apples, tamarind, spices, vinegar, and sometimes raisins. The taste is either tart or sweet with a peppery taste similar to that of Worcestershire sauce.

Brown sauce is typically eaten with meals such as full breakfasts, bacon sandwiches and chips.

A combination of spirit vinegar (or water) and brown sauce known simply as "sauce" or "chippy sauce" is popular on fish and chips in Edinburgh, Scotland.

A recipe for "sauce for steaks" composed of ale, wine, ketchup, black pepper and butter appeared in an 1843 cookbook published in London entitled English Cookery. 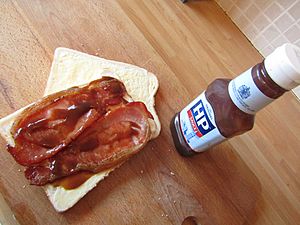 HP Sauce on a bacon sandwich

HP Sauce, a spicy and tangy variety currently manufactured in the Netherlands, is the most popular brown sauce in the United Kingdom, accounting for around 75% of sales. Daddies (manufactured in Poland) is also a popular sauce in some regions. Other brands include OK Sauce and Wilkin & Sons which are made in the U.K. In Scotland, the most well known brand is Gold Star which is more commonly known as "Chippy Sauce" due to it being the condiment of choice in most Edinburgh chip shops since its creation in the 1920s.

Chef and YR Sauce are popular brown sauce brands in Ireland. While YR stands for Yorkshire Relish, the sauce has been produced in Ireland since 1933 and is currently manufactured in County Donegal by Robert Roberts. Kandee a brand that comes in a larger canned bottle.

Most supermarket chains in the UK and Ireland also stock their own brand of brown sauce. As with other condiments like ketchup, mayonnaise, and mustard, brown sauce is widely available in catering sachets and dispenser bottles in restaurants.

Many countries have their own sauces which are similar to brown sauce, often containing comparable flavour profiles, ingredients, and uses. Examples include Japan's Tonkatsu sauce and Jamaica's Pickapeppa sauce. The Chinese use a soy/soya-based sauce thickened with potato or corn starch that they call "brown sauce" (棕色酱 or "Zōngsè jiàng"). "Steak sauce" is a similar product in the United States.

Between 2013 and 2014 the sales of brown sauces in the UK decreased by approximately 19%, according to market research company Mintel, but more than 13 million kg is still consumed each year.

All content from Kiddle encyclopedia articles (including the article images and facts) can be freely used under Attribution-ShareAlike license, unless stated otherwise. Cite this article:
Brown sauce Facts for Kids. Kiddle Encyclopedia.