A bacon sandwich (also known in parts of Great Britain, most of Ulster and parts of New Zealand as a bacon butty, bacon bap or bacon sarnie, in most of Ireland (except for most of Ulster) as a rasher sandwich and as a bacon sandi in Australia) is a sandwich of cooked bacon between bread that is optionally spread with butter, and may be seasoned with ketchup or brown sauce. It is generally served hot. In some establishments the sandwich will be made from bread toasted on only one side, while other establishments serve it on the same roll as is used for hamburgers.

Bacon sandwiches are an all-day favourite throughout the United Kingdom and the Republic of Ireland. They are often served in British cafes, and are anecdotally recommended as a hangover cure.

The New York Times-London Journal reported on a study conducted at Leeds University which consisted of testing 700 variants of the sandwich. They experimented with different cooking styles, types of bacon, breads, oils, and special additions. Each variant was then ranked by 50 tasters. In conclusion, the best bacon sandwiches are made with "crispy, fried, and not-too-fat bacon between thick slices of white bread."

Another study by the Direct Line for Business listed the top additions to the traditional bacon butty in England. Although the original was still the preferred sandwich, the next top contender was the "breggy" which adds an egg. The next popular accessory was mushrooms, followed by cheese. For sauces, brown sauce was slightly favoured over ketchup.

The BLT is a popular variant of the bacon sandwich with the additional ingredients of lettuce and tomato, but served cold.

In Ontario, Canada, peameal bacon sandwiches are a common variation, usually served on a soft kaiser bun and are considered the unofficial dish of Toronto.

Numerous studies have showed a connection between processed meats and an increased risk of serious health conditions such as type 2 diabetes, various cancers, and cardiovascular disease.

A study in 2007 conducted by the World Cancer Research Fund found that there was "convincing evidence" of a link between processed meats and an increased chance of cancer. Although no numerical value was provided for the risk, they did state that "people should not eat more than 500g of red meat a week."

The World Health Organization released a warning concerning the sodium content in bacon. For 100g of bacon, there are approximately 1,500 mg of sodium. Currently, the FDA reports that the average American adult should consume less than 2,300 mg per day. Too much sodium in the diet can lead to a higher probability of high blood pressure, which is a major cause of heart disease and stroke. 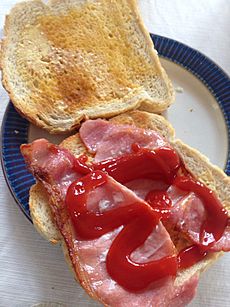 A toasted bacon sandwich with butter and tomato ketchup

All content from Kiddle encyclopedia articles (including the article images and facts) can be freely used under Attribution-ShareAlike license, unless stated otherwise. Cite this article:
Bacon sandwich Facts for Kids. Kiddle Encyclopedia.