Kids Encyclopedia Facts
This page is about the sandwich. For other uses, see BLT (disambiguation). 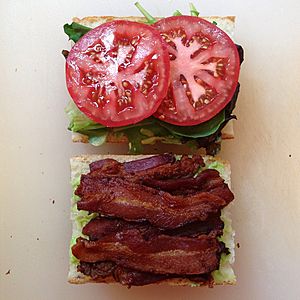 A BLT is a type of sandwich, named for the initials of its primary ingredients, bacon, lettuce, and tomato. It can be made with varying recipes according to personal preference. Simple variants include using different types of lettuce, toasting or not, or adding mayonnaise. More pronounced variants can include using turkey bacon or tofu in place of bacon, or removing the lettuce entirely. 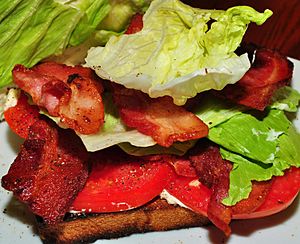 A close-up view of a BLT sandwich

Although the ingredients of the BLT have existed for many years, there is little evidence of BLT sandwich recipes prior to 1900. The 1903 Good Housekeeping Everyday Cook Book, a recipe by a Dr. Evan Mee for a club sandwich included bacon, lettuce, tomato, mayonnaise and a slice of turkey sandwiched between two slices of bread. While the 1928 book Seven Hundred Sandwiches by Florence A. Cowles does include a section on bacon sandwiches, the recipes often include pickles and none contain tomato.

The BLT became popular after World War II because of the rapid expansion of supermarkets, which allowed ingredients to be available year-round. The initials, representing "bacon, lettuce, tomato", likely began in the U.S. restaurant industry as shorthand for the sandwich, but it is unclear when this transferred to the public consciousness. For example, a 1951 edition of the Saturday Evening Post makes reference to the sandwich, although it does not use its initials, describing a scene in which: "On the tray, invariably, are a bowl of soup, a toasted sandwich of bacon, lettuce and tomato, and a chocolate milk shake."

A 1954 issue of Modern Hospital contains a meal suggestion that includes: "Bean Soup, Toasted Bacon Lettuce and Tomato Sandwich, Pickles, Jellied Banana Salad, Cream Dressing, and Pound Cake." By 1958, Hellmann's Mayonnaise advertised their product as "traditional on bacon, lettuce, and tomato sandwiches," suggesting that the combination had been around for some time. However, there are several references to a "B.L.T" in the early 1970s, including in one review of Bruce Jay Friedman's play entitled Steambath titled: "A B.L.T. for God – hold the mayo.". The abbreviation used in title references a line of dialogue in the play in which God yells, "Send up a bacon and lettuce and tomato sandwich, hold the mayo. You burn the toast, I'll smite you down with my terrible swift sword." The coexistence of the shortened version and the full name suggests this was a period of transition as the abbreviation was popularized.

While there are variations on the BLT, the essential ingredients are bacon, tomatoes, and lettuce between two slices of bread, often toasted. The quantity and quality of the ingredients are matters of personal preference. The bacon can be well cooked or tender, but as it "carries" the other flavors, chefs recommend using higher quality meat; in particular, chef Edward Lee states "Your general supermarket bacon is not going to cut the mustard."

Iceberg lettuce is a common choice because it does not add too much flavour while adding crunch. Food writer Ed Levine has suggested that BLT does not require lettuce at all, as it is "superfluous", a suggestion that Jon Bonné, lifestyle editor at MSNBC, described as "shocking". Michele Anna Jordan, author of The BLT Cookbook, believes the tomato is the key ingredient and recommends the use of the beefsteak tomato as it has more flesh and fewer seeds. Similarly, chef and food writer J. Kenji Lopez-Alt believes that a BLT is not a bacon sandwich with additional ingredients, but rather, a tomato sandwich seasoned with bacon. For that reason, Lopez-Alt argues that the BLT is a seasonal sandwich best made with high-quality summer tomatoes.

The sandwich is sometimes served with dressings, like mayonnaise. The bread can be of any variety, white or wholemeal, toasted or not, depending on personal preference. 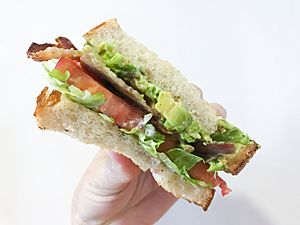 The sandwich has a high sodium and fat content, and has been specifically targeted by UK café chains in an effort to reduce salt and fat. Due to this, low-fat mayonnaise is a common substitute along with low salt bread and less fatty bacon. A more visible solution is to use turkey bacon in lieu of normal bacon. One of the variations on the BLT is the club sandwich, a two-layered sandwich in which one layer is a BLT. The other layer can be almost any sort of sliced meat, normally chicken or turkey.

In 1963, pop art sculptor Claes Oldenburg created Giant BLT, a soft sculpture representing the sandwich, now in the collection of the Whitney Museum of American Art. It measures 32 by 39 inches (81 cm × 99 cm) and uses vinyl, kapok and wood, painted in acrylic. Every time it is moved, it must be restacked, which means it varies between exhibits. The artist has said that he has not set it up personally since its creation in 1963.

In 2004, the New Statesman reported that the sandwich chosen by a politician as his "favourite" is loaded with political symbolism. For example, it suggested that a chicken tikka sandwich would be a "gentle nod to an imperial past and a firm statement of a multicultural present and future". The article went on to explain that the then Leader of the Opposition William Hague had accused the then Prime Minister Tony Blair of being a hypocrite with regards to food, telling one portion of society that his favourite meal was fish and chips and another that it was a fresh fettuccine dish. The conclusion of the article was that Blair chose the BLT as his favourite sandwich, which appeals to all classes.[undue weight? – discuss]</ref>

All content from Kiddle encyclopedia articles (including the article images and facts) can be freely used under Attribution-ShareAlike license, unless stated otherwise. Cite this article:
BLT Facts for Kids. Kiddle Encyclopedia.