Ginger wine is a fortified wine made from a fermented blend of ground ginger root and raisins which was first produced in England. It is often fortified by being blended with brandy (especially cognac). Ginger wine can be drunk with ice ("on the rocks"), or without ice (either "neat" or "straight up"), and is frequently used as an ingredient—along with whisky (typically a blended Scotch whisky)—in a "Whisky Mac" (the shortened form of "Whisky Macdonald"). Ginger wine can also be served mixed with other beverages, such as lemonade, ginger ale, bitter lemon or diluted with water. Ginger wine is traditionally sold in green glass bottles, although the word "green" may or may not appear on the label. 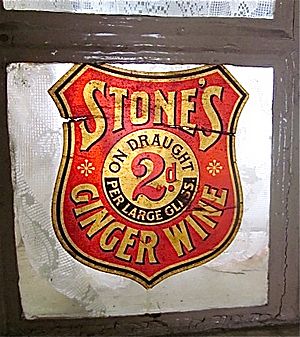 The first documented appearance of ginger wine occurred with the foundation of The Finsbury Distillery Company based in the City of London in 1740. The company, like other distillers, was required to build a retail network in compliance with the Gin Act 1751. Joseph Stone, a grocer on High Holborn street, central London, was one of the most prominent and important customers of the Finsbury wines division, and as such, had his name given to their ginger wine.

In the 19th century, sales were boosted by a cholera epidemic and a widely held belief that ginger offered protection against the disease. Other 19th-century claims marketed it as a medicinal tonic that aided digestion. Today, it is still produced and is widely available through most licensed premises.

In the UK a ginger essence called "Yulade" is produced by the Co-op, and is widely used at festive times to make a non-alcoholic 'ginger wine' popular for children and teetotal households. In some instances ginger wine may be mistaken for ginger beer, which by definition contains grains. Since 2007, ginger wine has also been sold under the name "ginger libation" by a producer in Massachusetts, with the addition of pineapple and citrus.

All content from Kiddle encyclopedia articles (including the article images and facts) can be freely used under Attribution-ShareAlike license, unless stated otherwise. Cite this article:
Ginger wine Facts for Kids. Kiddle Encyclopedia.