A bilberry is the fruit of a type of shrub that grows close to the ground. It is a member of the genus Vaccinium.

The bilberry is native to Europe, whereas the blueberry and huckleberry are native to North America. They are closely related, and members of the same genus.

The bilberry is known by many names. It is also called blaeberry, whortleberry, whinberry, myrtle blueberry, fraughan, and probably other names in different places. In Thomas Hardy's 1878 book, The Return of the Native, they were called black-hearts in 19th century southern England. 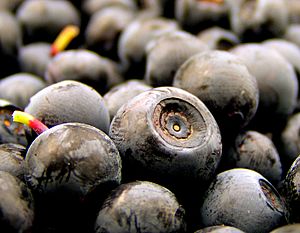 All content from Kiddle encyclopedia articles (including the article images and facts) can be freely used under Attribution-ShareAlike license, unless stated otherwise. Cite this article:
Bilberry Facts for Kids. Kiddle Encyclopedia.