Kids Encyclopedia Facts
Not to be confused with Shortcake or Shortcrust pastry.

Shortbread (or shortie) is a traditional, unleavened Scottish biscuit (cookie in American English) usually made from one part white sugar, two parts butter, and either three parts oat flour or four parts plain wheat flour. Unlike many other biscuits and baked goods, shortbread does not contain any leavening, such as baking powder or baking soda. Shortbread is widely associated with Christmas and Hogmanay festivities in Scotland, and some Scottish brands are exported around the world.

Shortbread originated in Scotland. Shortbread is derived from a medieval biscuit bread, which was a twice-baked, enriched bread roll dusted with sugar and spices and hardened into a hard, dry, sweetened biscuit called a rusk. Eventually, yeast from the original rusk recipe was replaced by butter, which was becoming more of a staple in Britain and Ireland.

Although shortbread was prepared during much of the 12th century, and probably benefited from cultural exchange with French pastry chefs during the Auld Alliance between France and Scotland, the refinement of shortbread is popularly credited to Mary, Queen of Scots in the 16th century. This type of shortbread was baked, cut into triangular wedges, and flavored with caraway seeds.

The first printed recipe, in 1736, was from a Scotswoman named Mrs McLintock.

Shortbread was expensive and reserved as a luxury for special occasions such as Christmas, Hogmanay (Scottish New Year’s Eve), and weddings. In Scotland, it was traditional to break a decorated shortbread cake (infar-cake or dreaming bread) over the head of a new bride on the entrance of her new house. Shortbread was also given as a gift.

Shortbread is so named because of its crumbly texture (from an old meaning of the word "short", as opposed to "long", or stretchy). The cause of this texture is its high fat content, provided by the butter. The short or crumbly texture is a result of the fat inhibiting the formation of long protein (gluten) strands. The related word "shortening" refers to any fat that may be added to produce a "short" (crumbly) texture.

In British English, shortbread and shortcake were synonyms for several centuries, starting in the 1400s; both referred to the crisp, crumbly cookie-type baked good, rather than a softer cake. The "short-cake" mentioned in Shakespeare's play The Merry Wives of Windsor, first published in 1602, was a reference to the cookie-style of shortbread.

In American English, shortbread is different from shortcake. Shortcake usually has a chemical leavening agent such as baking powder, which gives it a different, softer texture, and it was normally split and filled with fruit. The most popular example of this different is strawberry shortcake.

Other ingredients are often substituted for part of the flour to alter the texture. Rice flour or semolina makes it grittier, and cornflour makes it more tender. Bere or oat flour is added for flavor.

Modern recipes also often deviate from the original by splitting the sugar into equal parts granulated and icing sugar and many add a portion of salt.

Spices and ingredients such as almonds may be added. 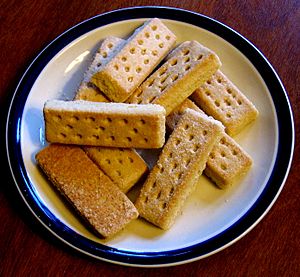 Shortbread is commonly formed into one of three shapes:

In one the oldest shapes, bakers pinched the edges of a shortbread round to suggest the rays of the sun.

The stiff dough retains its shape well during cooking. The biscuits are often patterned before cooking, usually with the tines of a fork or with a springerle-type mold. Shortbread is sometimes shaped into hearts and other shapes for special occasions.

In ancient Scottish folklore, sun-shaped cakes, such as shortbread, had magic powers over the Sun during the Scottish New Year's Eve.

Shortbread is generally associated with and originated in Scotland, but due to its popularity it is also made in the rest of the United Kingdom, and similar biscuits are also made in Denmark, Ireland and Sweden. The Scottish version is the best-known, and is widely exported.

Scottish chef John Quigley, of Glasgow's Red Onion, describes shortbread as "the jewel in the crown" of Scottish baking.

An early variety of shortbread, using ginger, was reportedly eaten during sittings of the Parliament of Scotland, and therefore the variety was sometimes called "Parliament cake" or "Parlies" into the 19th century. The biscuits were sold in Mrs Flockhart's tavern and shop in Bristo Street in Edinburgh's Potterrow. Known as Luckie Fykie, the landlady was thought to be the inspiration for Mrs Flockhart in Walter Scott's Waverley.

In the UK tax code, shortbread is taxed as a flour confection (baked good) rather than as a common biscuit.

All content from Kiddle encyclopedia articles (including the article images and facts) can be freely used under Attribution-ShareAlike license, unless stated otherwise. Cite this article:
Shortbread Facts for Kids. Kiddle Encyclopedia.