Shortcake is a sweet cake or biscuit in the American sense that is a crumbly bread that has been leavened with baking powder or baking soda. In the UK, the term shortcake refers to a biscuit similar to shortbread. They are generally less dense and more crunchy and dry than shortbread.

Shortcake is typically made with flour, sugar, baking powder or soda, salt, butter, milk or cream, and sometimes eggs. The dry ingredients are blended, and then the butter is cut in until the mixture resembles cornmeal. The liquid ingredients are then mixed in just until moistened, resulting in a shortened dough. The dough is then dropped in spoonfuls onto a baking sheet, rolled and cut like baking powder biscuits, or poured into a cake pan, depending on how wet the dough is and the baker's preferences. Then it is baked at a relatively high temperature until set. 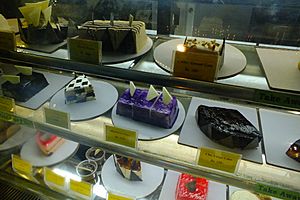 Strawberry shortcake is a widely known dessert made with shortcake. Sliced strawberries are mixed with sugar and allowed to sit an hour or so, until the strawberries have surrendered a great deal of their juices (macerated). The shortcakes are split and the bottoms are covered with a layer of strawberries, juice, and whipped cream, typically flavored with sugar and vanilla. The top is replaced, and more strawberries and whipped cream are added onto the top. Some convenience versions of shortcake are not made with a shortcake (i.e. biscuit) at all, but instead use a base of sponge cake or sometimes a corn muffin. Japanese-style strawberry shortcakes use a sponge cake base, and are a popular Christmas treat in Japan.

Though strawberry is the most widely known shortcake dessert, peach shortcake, blueberry shortcake, chocolate shortcake and other similar desserts are made along similar lines. It is also common to see recipes where the shortcake itself is flavored; coconut is a common addition.

Though today's shortcakes are usually of the biscuit or sponge-cake variety, earlier American recipes called for pie crust in rounds or broken-up pieces, which was a variety still being enjoyed in the 21st century, particularly in the South.

All content from Kiddle encyclopedia articles (including the article images and facts) can be freely used under Attribution-ShareAlike license, unless stated otherwise. Cite this article:
Shortcake Facts for Kids. Kiddle Encyclopedia.