The town was once dominated by Polkemmet Colliery – a large coal mine – but this was closed as a result of damage by underground flooding during the 1984-85 miners' strike and never re-opened. The colliery buildings have gone, and the coal bings that once were prominent have now been removed. Work to dismantle Bing No 3, the infamous burning bing, started in August 2006 and was completed by February 2008. The last major outbreak of burning occurred in 1998. 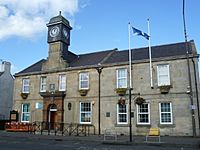 The town's population was boosted by the 1960s Glasgow overflow. The town's Murraysgate and surrounding areas north-west of the cross were established to deal with the overflow.

Whitburn has a King George's Field in memory of King George V which was opened in 1955 by Queen Elizabeth II.

On 16 January 2012, a planning application was submitted regarding the rebuild of the swimming pool; drawings of the new facility were posted on the Xcite Leisure Website.

Whitburn is home to Whitburn Junior F.C. who play at Central Park and are in the SJFA East Region Super League. In 2000 they won the OVD Scottish Juniors Cup.

Whitburn Martial Arts Centre opened in 2009, though ran as West Lothian Taekwon-Do since 2004. They ran free Taekwon-Do keep fit classes at Polkemmet, Croftmalloch and St. Joseph's Primary Schools in Whitburn from 2004 to 2008. The Centre funds many students to compete at National Championships and has many Scottish and British Champions.

The town holds its annual gala day on the fourth Saturday in June; there is a parade through the town, followed by games and races at King George V Park. The gala day is part of a week of activities known as the "Civic Week"; this also includes a fairground and a fireworks display in King George V Park.

Polkemmet Country Park is located to the west of the town, and incorporates woodland, a golf course, cafe, and play area. The park is also locally famous for the Polkemmet Horn which can be seen from the M8 motorway which runs to the north of the country park. There is also a disused steam locomotive from Polkemmet Colliery on display. Since 2012 Polkemmet Park has also been the site of the Scottish Owl Centre.

All content from Kiddle encyclopedia articles (including the article images and facts) can be freely used under Attribution-ShareAlike license, unless stated otherwise. Cite this article:
Whitburn, West Lothian Facts for Kids. Kiddle Encyclopedia.