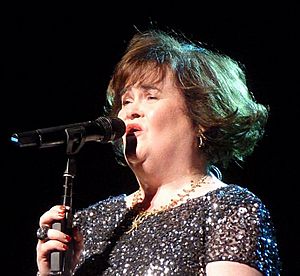 Susan Magdalane Boyle (born 1 April 1961) is a Scottish singer who became famous through Britain's Got Talent. Her version of "I Dreamed a Dream" from Les Misérables has many video views on YouTube. She appeared on America's Got Talent. Boyle's first album I Dreamed a Dream was released on 23 November 2009. It went straight to number one in the UK Albums Chart. It sold more copies than any other album in the UK in 2009.

She has had two no. 1 albums in the United States.

Boyle has lived in the same council house in Blackburn, West Lothian, Scotland all her life. She has a cat named Pebbles. Boyle's autobiography, The Woman I Was Born to Be: My Story, was published in 2010. She was diagnosed with Asperger syndrome in 2012. She is a Roman Catholic.

All content from Kiddle encyclopedia articles (including the article images and facts) can be freely used under Attribution-ShareAlike license, unless stated otherwise. Cite this article:
Susan Boyle Facts for Kids. Kiddle Encyclopedia.