Fernhill is a residential neighbourhood in the Scottish town of Rutherglen in South Lanarkshire; it is situated south of the River Clyde and borders the Rutherglen neighbourhoods of High Burnside to the north and Cathkin to the east, the Glasgow district of Castlemilk to the west, and the open lands of Fernbrae Meadows (formerly Blairbeth Golf Club which closed in 2015) to the south. Its location on a steep incline which is part of the Cathkin Braes range of hills offers panoramic views over the south and eastern parts of Greater Glasgow.

Fernhill is within the Rutherglen South ward of South Lanarkshire Council which is also the extent of the neighbourhood community policing zone; local councillors include the experienced politician Robert Brown. 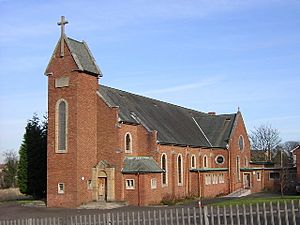 St. Marks RC Church at the western side of Fernhill

Until about 1950 the lands of Fernhill were open fields to the south of Rutherglen outwith the boundaries of the town, overlooked by a large mansion (Fernhill House, constructed around 1870). In order to alleviate overcrowding and housing shortages in central Rutherglen (caused in part by the construction of a Dual carriageway bypass road through the town), the town council identified and purchased the territory for a housing scheme. Construction took place over the late 1950s and 1960s. The district consists of terraced and semi-detached houses as well as apartments and maisonettes in traditional tenement style buildings and standalone flat-roofed blocks.

The edge-of-town development has some similarities with the much larger Castlemilk housing estate which borders Fernhill immediately to the west and was built around the same time for similar reasons. Residents of Fernhill and Castlemilk have suffered as a result of antisocial behaviour and territorial violence between rival youth gangs, although in recent years this has been tackled and the situation appears to be improving.

The boundary between the two areas, which also separates the Glasgow and South Lanarkshire local authority zones, is known as the ‘Hole in the wall’, a historic term referring to an opening between fields on a drover’s route across the undeveloped countryside. Today this is the site of the area’s main landmark, a whitewashed statue by Kenny Hunter of a boy with binoculars and cape looking downhill towards Glasgow. A motto below the statue reads “Somewhere in the distance… Is My Future”. 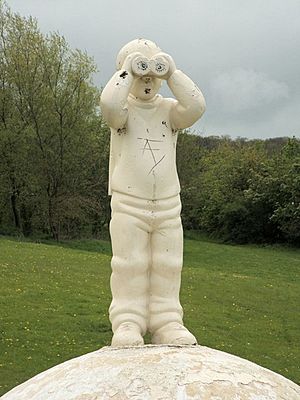 In common with many urban neighbourhoods in the UK, the area suffered over decades from a lack of employment opportunities and underinvestment, leading to social problems and deterioration in some of its housing stock and amenities. Improvements to Fernhill in the 21st century as part of a regeneration masterplan include the opening of a new Community and Sports Centre in 2011 replacing the outdated pavilion on the same site, energy efficiency improvements, and the rebuilding of local shops on the main road in 2014.

In 2014 the local council released plans to complete the Rutherglen bypass road (see above) along the north side of Fernhill to better link Glasgow to East Kilbride and alleviate pressure on traffic along other routes including Fernhill Road. However the ‘Cathkin Relief Road’ project faced considerable local opposition as the undeveloped land earmarked for the road had been used as an informal park by locals for many years, and it was also felt this new road could isolate Fernhill from the other nearby communities. Ultimately these concerns were disregarded and the project was approved in late 2015; work began on the site in 2016. 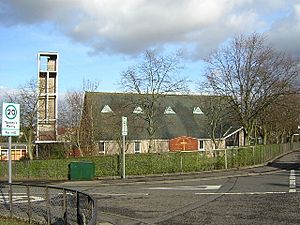 There are two places of worship at either end of the main road through the district: St. Marks RC Church at the west side and Fernhill & Cathkin Church (of Scotland) at the east side.

There is a regular public bus service running along Fernhill Road, linking the community to Rutherglen, central Glasgow and East Kilbride. The nearest train station is Burnside which is a distance of approximately ¾ mile.

There are no local authority schools in Fernhill itself - the closest primary schools are in Cathkin (Cathkin Primary) and Blairbeth (St. Marks RC Primary) and affiliated to Cathkin High School and Trinity High School respectively; however it is the location of one of the more prestigious fee-paying educational institutions in Scotland, Fernhill School who have their premises at the highest point of the incline at the southern edge of the district – the main building is the historic Fernhill House which is the oldest surviving structure in the area.

All content from Kiddle encyclopedia articles (including the article images and facts) can be freely used under Attribution-ShareAlike license, unless stated otherwise. Cite this article:
Fernhill, South Lanarkshire Facts for Kids. Kiddle Encyclopedia.