Burnside is a residential district in the Scottish town of Rutherglen in South Lanarkshire, It borders with Cambuslang, Wardlawhill, Blairbeth, Clincarthill, High Crosshill, Stonelaw, Fernhill and Springhall.

Stonelaw Road (part of the A749) is the heart of Burnside and is home to a supermarket and bus stops with First Glasgow services 18 (to Buchanan Bus Station & East Kilbride), 7 (to the St Enoch Centre & Cambuslang) and the number 14 Henderson 'Ruglen Rambler' service to Rutherglen Town Centre and Fernhill. Burnside railway station, as part of the Cathcart Circle Lines, is served by half-hourly, seven-day services between Newton and Glasgow Central via Mount Florida or Langside.

Previously, Burnside had its own cinema on Stonelaw Road, the Rhul Cinema. Built in 1932 by the Burnside Picture House Company, the cinema was sold to ABC in 1936 and later demolished in 1960. The space is now occupied by a supermarket, which was previously run by Safeway and Somerfield, but is presently a Tesco, who purchased and completed a comprehensive redevelopment of the store in 2010. 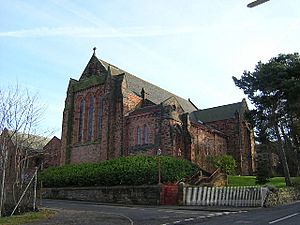 The Burnside church was opened approximately 80 years ago, and was completely refurbished in 2002. In 2005, the Rev. David Easton retired after serving as minister there for 28 years. In September 2006, William Wilson was inducted to the vacant charge. Aside from two Sunday Services, there are Sunday Clubs for children and The Way, a club for secondary school students. The Blairbeth building, Roger Memorial, has Storykeepers a club for P1s to P3s and Megaquest a club for P4s to P7s.

Stonelaw Road is the heart of the Burnside community. Shops around here include three cafes, a florist, several estate agents, three hairdressers, two banks (the Royal Bank of Scotland and the Bank of Scotland), Tesco, a newsagent, two takeaways, a betting shop, an undertaker, two pharmacies, two dentists, a beauty salon, an optician, an alterations shop, two bakers, including a Greggs, a picture framer, a petrol station, car wash and Italian restaurant. Recently a new Podiatry clinic opened which also offers Bowen Therapy and Hypnotherapy.

All content from Kiddle encyclopedia articles (including the article images and facts) can be freely used under Attribution-ShareAlike license, unless stated otherwise. Cite this article:
Burnside, South Lanarkshire Facts for Kids. Kiddle Encyclopedia.