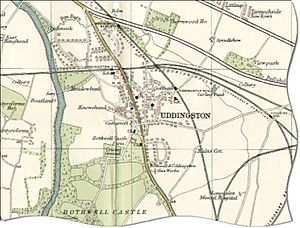 Map of Uddingston and Viewpark in 1923

Viewpark is a small urban development north-east of Uddingston in North Lanarkshire, Scotland. Viewpark is adjacent to Tannochside, and is 2 kilometres (1.2 mi) west of Bellshill. Viewpark is often considered a district of Uddingston despite falling under the jurisdiction of a separate local authority. It has a population of 15,841 as of 2014, which is quite large for an urban neighbourhood in Scotland, it is a similar size to Bathgate in West Lothian and Calderwood in East Kilbride.

Viewpark was originally built to house miners and was erected quickly Construction work on "The Scheme" starting late 1950s and with houses down to Laburnum Road being occupied around the beginning of the 1960s. These supplement housing built adjacent and parallel to the "Top Road" - the Old Edinburgh Road where could be found the Police Station (whose siren continued to sound practice air raid warning into the 1960s) alongside the local football ground and opposite The Royal Oak Bar. Dominic's Shop (now long closed) alongside "The Lane" allowing quick access to the adjoining community and the local swing park on Douglas Street - named for the association with the Douglas (Home?) estate the houses were built upon. . The older houses were originally called "The Raws". Viewpark grew steadily at this time to support housing demand in an area which was thriving at the time with industries such as Mining and Ranco and the Caterpillar Tractor Co which opened its doors in 1959 thus creating a boom in the population of the area which is known today as Viewpark.

1956 and the main thoroughfare in Viewpark, Laburnum Road, often referred to as "The Burma Road", in reference to its length, was well underway in its construction. That same year, the local council set up what has now become Burnhead Bowling Club, along with an adjacent tennis court. A new church was built, Burnhead Parish Church, on Laburnum Road, opposite its junction with Burnhead Street.

Located near the older housing within Viewpark is the Glen, also known locally as the "Viewpark Glen" which expands across Uddingston, Bothwell, Hamilton, Coatbridge and Motherwell. Within the Glen lies famous Roman ruins such as a Roman bridge as well as tombs dating back centuries further.

The demolition of the miners homes, referred to as The Miners Rows, in Tannochside, which released land for the erection of the Caterpillar Tractor Co. led to an influx of displaced families into the Viewpark area. However, no one was complaining, gone was the "hole in the wall bed", and in its place, a brand new home, with separate bedrooms, kitchen areas, and indoor bathing and toilet facilities. A modern wonder indeed! A similar fate befell the Miners Rows at Cockhill, located due east of Laburnum Road. That land has now been utilised as a football field, with a shopping area on the north side of Old Edinburgh Road. Kerrs Farm at Cockhill, also disappeared, and that land, which extended between Laburnum Road and the new bypass road, the A725, was used to create Righead Industrial Estate.

A shopping complex was added in the centre of the new housing complex, aptly located in Market Place, just off Burnhead Street, opposite the old rose gardens (now long gone) - now replaced by the Community Centre, a Sports Complex, and a Medical Centre. This being immediately opposite the Gala Day Park where the local Miners Welfare would organise their annual MayDay celebration where each child was presented with a Tunnock's Box of cakes and fancies after competing in games and races. That park is still there. The hollow track that can be seen visibly running from top to bottom close to the footpath a visual reminder of the severe winter of 1963/64 when a slide was maintained in the one spot for months on end and was repolished and enjoyed by local children each and every day through those days of wild (and wonderful) weather when birds froze in the trees along with the milk on your doorstep.

Viewpark was home to one of Celtic Football Club's most famous players, Jimmy 'Jinky' Johnstone who lived near the old St.Columbas Primary School. This was built adjacent the local Catholic Church on Old Edinburgh Road. The 1960s concrete 4 storey school building that most people will remember has since been knocked down and its extensive grounds exploited to provide for private housing. The 1960s building was itself constructed to replace an older wooden school dating to some years prior. This original having been demolished after an outbreak of fire in that wooden structure (strangely) one Sunday around 1963 (?). Children attending the school then being bussed/distributed around the surrounding Catholic schools such as Holy Family School in Mossend whilst construction on that "new" school took place.

A local "Junior Secondary" was built at the corner of Laburnum Road and New Edinburgh Road - Saint Catherine's (opened 1968?) - after much campaigning by local activists whose children had previously required to journey each day to St. John's, Uddingston or to Our Lady's High School, Motherwell for their secondary education. (Councillor Charlie Hebenton and local schoolteacher Catherine McCourt (née Keegans) being key participants in the campaign at the time).

In 2014, plans were put in place with the local council to construct an ASDA food store across the road from John Paul Primary School, near the Viewpark Glen, where the newer modern school which combined and accommodates the pupils of St.Columba and St. Gabriels Primary School. However, the plans to build the ASDA store were scrapped because the Scotmid store near it rejected.

Thorniewood United, a junior football club, is based in the area.

All content from Kiddle encyclopedia articles (including the article images and facts) can be freely used under Attribution-ShareAlike license, unless stated otherwise. Cite this article:
Viewpark Facts for Kids. Kiddle Encyclopedia.