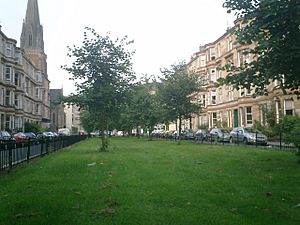 Woodlands is a residential area in the west-end of Glasgow, Scotland. It is located east of Hillhead, south of Woodside, and north of Park Circus. Kelvingrove Park borders Woodlands to the south, and the M8 motorway at Charing Cross is to the east.

Woodlands has a substantial Asian minority population (primarily Muslim) as well as a large number of students as residents. The area is in the vicinity of the University of Glasgow, and the university's Education Faculty is sited within the area.

The housing stock mostly consists of blonde sandstone tenement housing and modern redevelopment which is also predominantly in the tenement style.

Public transport includes Kelvinbridge and St George's Cross Subway stations, located respectively at the western and eastern extremes of the district, as well as numerous bus routes along Great Western and Woodlands Roads.

All content from Kiddle encyclopedia articles (including the article images and facts) can be freely used under Attribution-ShareAlike license, unless stated otherwise. Cite this article:
Woodlands, Glasgow Facts for Kids. Kiddle Encyclopedia.