The Park District of the West End of the city of Glasgow, Scotland, is an area located around Park Circus, which sits atop a hill beside Kelvingrove Park.

The Park District area is bordered by the City Centre, Kelvingrove, Kelvingrove Park and Woodlands. Many of the area's large townhouses converted to offices during the latter half of the 20th century are being returned to residential use. It is now generally considered one of the most prestigious residential areas in Glasgow, with several high-end developments and historical architecture.

Prior to 2013, the City of Glasgow civil marriage rooms were located at 22 Park Circus, in the former Italian consulate. The Scottish Football Association (SFA) had their headquarters on Park Gardens in the area, but moved to Hampden Park when the stadium was redeveloped to house them. 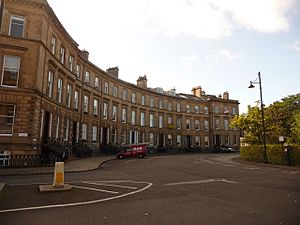 South side of Park Circus. 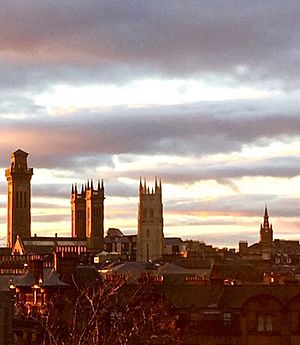 Park Circus forms a centrepiece of the Park District. It have two gently curving crescents of large 19th-century townhouses, including 22 Park Circus, and an oval garden in the centre. 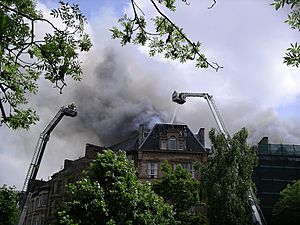 The University of Glasgow had a hall of residence on Park Terrace, known as Maclay Hall. It was donated to the University by Lord and Lady Maclay in 1921 in memory of their two sons who fell during the First World War. The hall was sold for private development in 2004. The development suffered a setback on 13 June 2006, when fire swept through House 18 and the surrounding terrace.

All content from Kiddle encyclopedia articles (including the article images and facts) can be freely used under Attribution-ShareAlike license, unless stated otherwise. Cite this article:
Park District, Glasgow Facts for Kids. Kiddle Encyclopedia.