Eastfield is a mainly residential district sandwiched between the South Lanarkshire industrial towns of Rutherglen and Cambuslang in the south-east of the Greater Glasgow urban area. It is situated south of the River Clyde and to the east of the Stonelaw and Burnside districts.

Formerly a country estate with a burn running through it, Eastfield was developed with housing between the 1930s and 1960s. A mix of council and private homes, the wider area is also home to two large modern high schools (Stonelaw and Trinity) and the associated public sports facilities of the latter including 5-a-side football fields and modern swimming pool known as South Lanarkshire Lifestyle Eastfield.

During the 20th century a prominent feature in the district was Richmond Park Laundry, at one time one of the largest such operations in the country. The facility opened around 1907, closed in 2004, and the premises were demolished in 2007 and replaced by a supermarket. The location was also familiar to Glasgow bus users as the terminus for the First Glasgow No 12 service.

Parcels of land in Eastfield were found to have been contaminated by chromium waste from the Whites Chemical Works, the most conspicuous of which was a large play area made from a filled-in quarry at the end of Dukes Road; this stood empty and fenced-off for a number of years before the waste was eradicated, and now modern apartments and a new landscaped park (Quarryfield) occupies the site.

Part of the territory which is generally considered to be part of Eastfield, including the local community centre, is within the postcode boundaries of Cambuslang (G72) while the remainder is within Rutherglen (G73). The entire district is currently administered as part of the Cambuslang West ward of the South Lanarkshire Council area.

The area is likely to be boosted economically in the 21st century by the expansion of the nearby M74 motorway which brings nationwide businesses to Eastfield's doorstep. Nearby to the north is one of Scotland's last steelworks at Clydebridge, previously a major employer in the area but operating in a greatly reduced capacity than in its heyday. 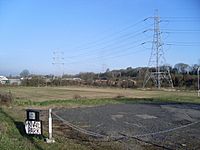 Pearse Park was the playing field that was the adopted home of Gaelic games in Scotland, situated on Cambuslang Road in Eastfield.

It was purchased by Scotland GAA in 1953 and is named after the Irish revolutionary Patrick Pearse. It was also home to Tír Conaill Harps. As of 2016 the park had been lying unused and overgrown for several years.

All content from Kiddle encyclopedia articles (including the article images and facts) can be freely used under Attribution-ShareAlike license, unless stated otherwise. Cite this article:
Eastfield, South Lanarkshire Facts for Kids. Kiddle Encyclopedia.