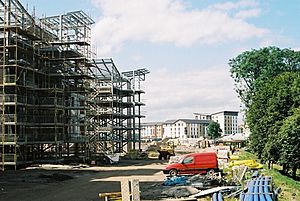 Oatlands is an area in the city of Glasgow, Scotland. It is situated south of the River Clyde. It is part of the Gorbals historic area, and its boundaries are Hutchesontown and the Southern Necropolis cemetery to the west, Polmadie to the south (across the UK M74 motorway and West Coast Main Line railway), Shawfield in the town of Rutherglen to the east, and Glasgow Green public park to the north (across the River Clyde). Oatlands had been connected to the Green via Polmadie Bridge but this was dismantled in 2015 due to structural safety concerns.

Until the 1990s, the area was characterised by four-storey sandstone tenements built at the end of the 19th century and the start of the 20th. A continuous line of tenements faced Richmond Park, opened in 1899, across busy Rutherglen Road, one of Glasgow's main arterial routes. 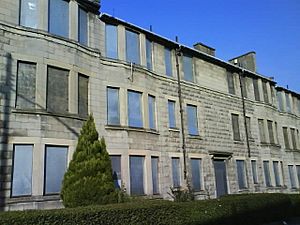 After a long process of demolitions, work started in April 2005 on a comprehensive redevelopment scheme to create a new neighbourhood consisting of around 1,510 houses (1,217 or 81% new private and 293 or 19% for social rental, 213 of which are new). The award-winning project was promoted by ppGlasgow City Council]]. The lead developer is Bett Homes with involvement from the Link and Glasgow Housing Associations, the local housing stock of the latter now being owned and managed by the New Gorbals Housing Association. By September 2007, part of the traffic by-pass (including a new Boulevard), 44 private houses and 172 social-rented dwellings had been constructed.

Well over 500 houses had been completed by 2014, with detailed planning permission given that year for another 378 private houses. The new tenements around Oatlands Square are well advanced; at its centre will soon be a major public artwork. Two allotment sites have been laid out and the Oatlands Development Trust has created a new play area as the first phase of the £2 million extension and upgrading of Richmond Park. The walkway by the River Clyde, linking to Hutchesontown was reopened in 2011. 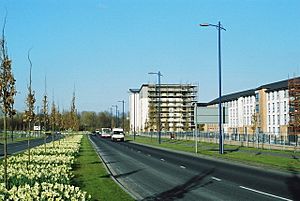 The diversion of Rutherglen Road to the southern edge of the site will allow integration of nearly all the housing with Richmond Park. Future plans include a community centre, shop units, a family pub/restaurant and school improvements. The project is almost entirely funded by Bett Homes in lieu of payment to Glasgow City Council for the land.

The regeneration project has not been without controversy. For many years, redevelopment was prevented because of the risk of fire or explosion from propane stored nearby; 756 flats in red sandstone tenements were demolished after the failure of a £7 million refurbishment scheme. Attempts to regenerate the area were initially stymied by proposals for a business park and resistance from Housing Department officials. Even today, although the area's character reflects the outcome of an intensive process of community engagement, the area's design is occasionally the subject of criticism by modernist architects, but all the signs indicate that the new Oatlands will, if completed in accordance with current plans, become one of Glasgow's most popular residential neighbourhoods.

All content from Kiddle encyclopedia articles (including the article images and facts) can be freely used under Attribution-ShareAlike license, unless stated otherwise. Cite this article:
Oatlands, Glasgow Facts for Kids. Kiddle Encyclopedia.