Ibrox (/ˈaɪbrɒks/; from Scottish Gaelic: Àth Bruic) "badger ford", Scottish Gaelic pronunciation: [aʰ pɾɯʰkʲ]) is a district in the Scottish city of Glasgow. It is situated south of the River Clyde and is part of the former Burgh of Govan.

It is within walking distance of the new Pacific Quay Media Park, housing BBC Scotland, Scottish TV and other production companies along with the Glasgow Science Centre. The opening of the Clyde Arc provides easy road access to the north of the river. 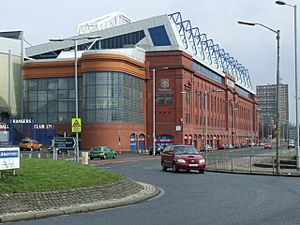 The home of football club Rangers F.C. is located in Ibrox and is known as Ibrox Stadium.

Ibrox is served by Ibrox subway station forming part of the Glasgow Subway system. Ibrox Subway Station is located on the corner of Copland Road and Woodville Street. 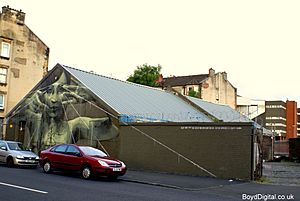 Ibrox is now home to an original artwork by South African artist Faith47. Located on Copland Road opposite the entrance to Fairley Street, the piece was completed during the preparations for the 2014 Commonwealth Games.

Copland Road is home to a number of residential homes as well as local shops and businesses including fast food outlets, grocery stores and bars. There are a number of bus stops as well as the Ibrox Subway station. This street can get particularly busy on matchdays.

Fairley Street is an industrial area found in Ibrox just off Copland Road that is home to a number of businesses.

As well as a number of shops, businesses and local amenities, Ibrox is home to a large number of residential homes serviced by public transport links including a bus service as well as the Subway.

All content from Kiddle encyclopedia articles (including the article images and facts) can be freely used under Attribution-ShareAlike license, unless stated otherwise. Cite this article:
Ibrox, Glasgow Facts for Kids. Kiddle Encyclopedia.