Tollcross (Scottish Gaelic: Toll na Croise) is an area north of the River Clyde in Glasgow and has a popular park opened in 1897 which is famed for its international rose trials. It lies approximately a mile east of the neighbouring suburb of Parkhead, and just north of Braidfauld and south of Shettleston.

Tollcross House was built in 1848 for James Dunlop who was one of the owners of the Clyde Iron Works. David Bryce and William Burn were the architects and the building replaced a substantial house that the original owners of the estate, the Corbets, had occupied. The house became a Children's Museum in 1897 and was converted into flats in 1989.

The area was once host to mass employment in the industrial age thanks largely to the large Fullarton steel works. McVitie's biscuit factory is one of the main employers in the area today. 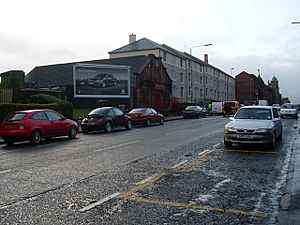 In 1997 the East End Leisure Centre in Tollcross Park became a feature of the area, having an Olympic-sized swimming pool, which is used by the City of Glasgow Swim Team.

Many residents of Lilybank would consider themselves residents of Tollcross, but they, like the biscuit factory, have been officially placed within the Braidfauld Ward of Glasgow City Council.

Part of the Tollcross area was formerly known as Egypt, and is still marked so on a number of maps. The name is believed to have been derived from a farm that existed at one time in the vicinity, operated by a former soldier who had been stationed in Egypt. The farm, owned by the Gordon family in 1920s before being sold to the Hamilton family is still there today.

The poet William Miller, author of "Wee Willie Winkie", is buried in Tollcross.

In June 2011, pupils from St. Aidan's and St. Joan of Arc School combined into a new school located in Tollcross Avenue. They voted to call the new school Cardinal Winning, after Thomas Winning, the late Archbishop of Glasgow who died in 2001. The new school opened on 21 June 2011. 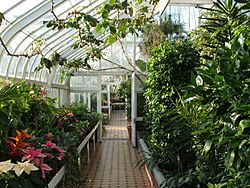 The interior of Tollcross Winter Garden in 2006. 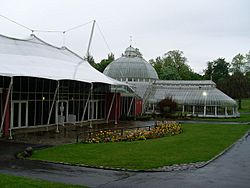 The Winter Gardens complex in 2009 prior to storm damage.

The Tollcross conservatories were originally erected in 1870 at Redholm in Ardrossan, North Ayrshire. Baillie A.G. MacDonald of Redholm gifted them to the Glasgow Corporation in 1898 as a gesture to commemorate his inks with the area. They were careful dismantled and re-erected at their present-day site. The Tollcross cast-iron Victorian conservatory (NS 63659 63721), is a B-Listed structure, known as the 'Winter Gardens'. It is Latin-cross shaped in layout, has two semicircular ends and is crowned with a dome. The scrolled cast iron buttresses are a notable feature.

The conservatory suffered storm damage in December 2010 and January 2011. The conservatory and associated building have been closed since that time. The Winter Gardens are on the register of buildings at risk in Scotland.

The Winter Gardens underwent a £1.9 million refurbishment between 1998 and 2000 carried out by a partnership of the Heritage Lottery Fund, Historic Environment Scotland and Glasgow City Council. A tent-like extension was built that housed a cafe, toilets, etc. and after being closed for fourteen years the Winter Gardens were opened again in November 2000.

The gardens reopened in November 2000 after being closed for 14 years. In 2008 Tollcross Park was voted the best park in Scotland with its children's farm, the aforementioned rose garden and a secret garden.

All content from Kiddle encyclopedia articles (including the article images and facts) can be freely used under Attribution-ShareAlike license, unless stated otherwise. Cite this article:
Tollcross, Glasgow Facts for Kids. Kiddle Encyclopedia.