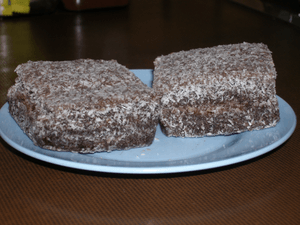 A lamington is an Australian cake, made from squares of butter cake or sponge cake coated in an outer layer of chocolate (or sometimes raspberry) sauce and rolled in desiccated coconut. The thin mixture is absorbed into the outside of the sponge cake and left to set, giving the cake a distinctive texture. A common variation has a layer of cream or strawberry jam between two lamington halves.

Maurice French, an emeritus professor of history at the University of Southern Queensland, who has examined the question in depth, believes that it is certain that lamingtons were named after either Lord Lamington, who served as Governor of Queensland from 1896 to 1901, or his wife, Lady Lamington. Most sources incline to the former option. The earliest known reference to the naming of the lamington, from June 1927, links the cake to Lord Lamington.

The identity of the recipe's inventor has also been debated. Most stories attribute its creation to Lord Lamington's chef, the French-born Armand Galland, who was called upon at short notice to feed unexpected guests. Using only the limited ingredients available, Galland cut up some left-over French vanilla sponge cake baked the day before, dipped the slices in chocolate and set them in coconut. Impressed by Galland's creation, Lamington's guests were said to have later asked for the recipe. This version of events is supported by Lady Lamington's memoirs. Coconut was not widely used in European cooking at that time, but was known to Galland whose wife was from Tahiti where coconut was a common ingredient. Another possible inventor is Amy Schauer, cooking instructor at Brisbane's Central College from 1897 to 1938.

One account suggests that the lamington was first served in Toowoomba, when Lord Lamington took his entourage to Harlaxton House to escape the steamy heat of Brisbane, whereas another claims that it was created by Galland at Queensland's Government House in Brisbane during the busy period leading up to Federation in 1901. A further alternative claim is that Lord Lamington's cook, presumably Galland, accidentally dropped a block of sponge cake into a dish of chocolate. It was later discovered that desiccated coconut, sprinkled over the top, made the cakes more appealing.

The first known mention of "Lamington cake" appears in an 1896 newspaper account of a "Lamington Function" at Laidley in Queensland. The event was in honour of Lord Lamington (although it appears he did not attend) and also featured "Lamington Tea", "Lamington Soup" etc, so, in the absence of any description of the cake, the name of the cake might signify nothing more than the name of the event. A 1900 recipe for Lamington Cakes has been found in the Queensland Country Life newspaper. While the recipe originated in Queensland, it spread quickly, appearing in a Sydney newspaper in 1901 and a New Zealand newspaper in 1902. However, none of these recipes indicate the creator of the recipe nor the reason for its name.

Due to an April Fools' Day prank in a New Zealand newspaper on 1 April 2014 written by Olaf Priol (an anagram of April Fool), some people believe that the lamington was a New Zealand sweet known as a Wellington which existed before the Australian lamington. 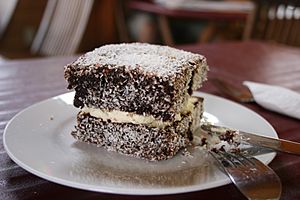 Lamingtons remain a popular snack across Australia and New Zealand and Friday, 21 July 2006, was designated as National Lamington Day in Australia. Lamingtons are often sold at fundraisers for schools or charity groups, known as "lamington drives". Some Australians shorten the name to "Lammo" (singular) or "Lammos" (plural).

A similar but smaller-sized confection is known in South Africa as ystervarkies (porcupines), while in Cleveland, Ohio, they are called coconut bars. Another similar dessert known as čupavci is also eaten in Serbia, Bosnia and Herzegovina, Croatia and Romania.

In 2009 as part of the Q150 celebrations, the lamington was announced as one of the Q150 Icons of Queensland for its role as an iconic "innovation and invention".

All content from Kiddle encyclopedia articles (including the article images and facts) can be freely used under Attribution-ShareAlike license, unless stated otherwise. Cite this article:
Lamington Facts for Kids. Kiddle Encyclopedia.