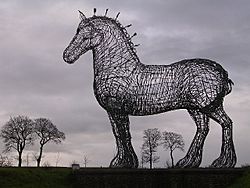 Springhill is a district in the Scottish city of Glasgow. It is situated north of the River Clyde on the eastern edge of the city, north of the areas of Baillieston and Garrowhill and west of Swinton.

Springhill consists mainly of semi-detached and detached family houses built in the 1990s, as well as an industrial estate which features the local DVSA driving test centre and a 4-metre high landmark wire sculpture of a Clydesdale Horse by Andy Scott, who has other works on display in the vicinity - a phoenix in Easterhouse and a group of sirens at the water tower in Cranhill. The district has a few local shops as well as a pub/restaurant, but most other amenities are located in Baillieston or Easterhouse.

Easterhouse railway station gives direct access to the centre of Glasgow and regular local bus services run along Edinburgh Road to the south of the district. Springhill can be accessed from the M8 motorway, using junctions 9 or 10.

All content from Kiddle encyclopedia articles (including the article images and facts) can be freely used under Attribution-ShareAlike license, unless stated otherwise. Cite this article:
Springhill, Glasgow Facts for Kids. Kiddle Encyclopedia.