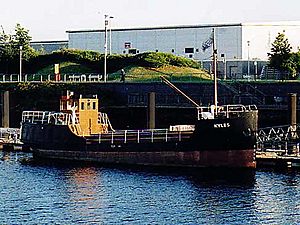 Braehead (Scots: Braeheid, Gaelic: Ceann a' Bhruthaich) is a commercial development located at the former site of Braehead Power Station in Renfrew on the south bank of the River Clyde in Renfrew, Renfrewshire. It is particularly notable for its large shopping centre, arena and leisure facilities.

The shopping centre was rebranded as Intu Braehead in 2013 as part of a corporate rebranding exercise by Capital Shopping Centres plc, now known as intu Properties plc.

Until at least the 18th century, the site was an island in the River Clyde, called King's Inch (a name that is preserved in the name of the road that bisects the site). Main article - King's Inch.

The original castle at Renfrew was built on King's Inch in the 12th century by Walter Fitz-Alan, High Steward of Scotland. It was abandoned in the 13th century and replaced by a stone castle in what is now the centre of Renfrew. In the latter half of the 15th century, Sir John Ross was granted the lands of Inch with the ruins of this castle, upon which he built a three-storeyed castle known as the Inch Castle.

In 1769, the King's Inch was purchased by Glasgow tobacco merchant Alexander Speirs, who demolished Inch Castle in order to build a country mansion, Elderslie House. Completed in 1782, Elderslie House was designed by Robert Adam. It was on the site of what is now the Shopping Centre and was demolished in 1924.

The power station was built after World War II. It remained operational into the 1980s, being demolished in the 1990s.

On 4 January 1977, a serious fire and explosion occurred at a warehouse in the Braehead Container Clearance Depot, adjacent to the Power Station. The fire was accidentally started by three boys who had lit a fire to warm themselves at a den which they had made, during the New Year holiday, from cardboard cartons stacked beside the warehouse. The fire detonated 70 tonnes of Sodium Chlorate weedkiller stored in the warehouse, producing a blast estimated by HM Inspectorate of Explosives as being equivalent to up to 820 kg of TNT.

The explosion was heard across the whole Greater Glasgow area, sent flying debris up to 2.8 km away, shattered windows in about 200 shops and houses in Renfrew and Clydebank, and caused an estimated £6 million of damage. Fortunately, and largely because it was a public holiday in Scotland, there were no deaths and only 12 people required treatment for shock and minor injuries.

The shopping centre opened in late 1999. It comprises 98,474 m2 (1,059,970 sq ft) of retail and leisure floorspace. The centre has 110 shops in the main covered mall, and a further 10 in a retail park of larger stores. Braehead is also home to Renfrew's IKEA store, which opened in 2001 and sits near the King George V Dock. At 29,000 m2 (310,000 sq ft), it is the largest IKEA store in Scotland and at the time of opening was the largest in the United Kingdom. Since opening, the centre has proved popular with consumers, and it has even been blamed for a downturn in the fortunes of shops in nearby Paisley, Govan and Renfrew.

On 7 October 2011, a father was stopped by security and questioned by police under anti-terror legislation after photographing his daughter at an ice-cream stall. This resulted in a social media backlash and statements from both Braehead's management and Strathclyde Police.

A planning application has been submitted to Renfrewshire Council for 'permission in principle' to build a new mixed-use development at the centre in January 2013.

In 2018 Braehead was named the top Scottish shopping centre in a GlobalData report.

Following Intu Properties plc entering administration in June 2020, a subsidiary of the company called Intu SGS received funding to take full control of the centre along with Lakeside, Victoria Centre and Intu Watford. The transfer from Intu to Intu SGS is expected to take place by the end of 2020, and will involve Global Mutual becoming asset manager of the centres and Savills serving as property manager. In 2020 it was reported that Braehead Shopping Centre was trialling the use of full-body security scanners at the entrance.

From September 1999 to October 2010, the Scottish Maritime Museum operated Clydebuilt at Braehead, a museum which explored the history of the Clyde shipbuilding industry and the industrial development of Glasgow and the River Clyde.

The museum had been built by and was subsidised by the owners of the shopping centre, but after they withdrew support the museum became financially unviable and Scottish Maritime Museum were forced to close it and transfer its exhibits to their other sites at Irvine and Dumbarton.

The building is now occupied by Krispy Kreme.

Xsite Braehead (formerly known as Intu Braehead Soar and Xscape Braehead) (55°52′45″N 4°22′17″W﻿ / ﻿55.8792°N 4.3713°W﻿ / 55.8792; -4.3713) began construction in November 2004 and was opened in March 2006 with its main use to teach people how to ski or snowboard. It is shaped differently, more like a conventional building but with the ski slope using a sloped cuboid structure projecting out the roof. The complex features a wide variety of entertainment, including an indoor ski slope, rock climbing, an Odeon, bowling, RoboCoaster, mini golf and laser tag, as well as a wide variety of shops, restaurants, and bars.

The Snow Factor indoor snow slope features a 168 m main slope with an additional 2,500 m2 (27,000 sq ft) dedicated beginners' area for ski and snowboard lessons. On the main slope, two Poma button lifts give a drag tow to the top and can be exited either at the halfway point on the slope or at the top station of the 200 m slope. Rope tows are used on the beginners slope.

Skiers and boarders are fully provided for with hire equipment, although the more advanced typically will have their own equipment. Sledging and an ice slide are provided.

Lessons can be booked for both boarding and skiing. Beginners start on the exclusive teaching slope before moving to the main slope. Initially only half of the main slope will be used before one advances to using the full slope. Once passed at the ability to ski or board from the full length of the slope, the pupil is allowed full access as they are deemed to have reached recreational level.

Clothing can be hired for a nominal charge, but gloves must be either purchased unless provided by the attendee. There are also helmets available for free use.

In March 2006, weeks before the complex was scheduled to open, the roof of screen seven of the Odeon fell in and required extensive re-building. The mini-golf (which is housed below the cinema) opened in July 2006. The cinema opened on 19 October 2007, 18 months later than planned. "Stardust" was the first film shown at the cinema. The cinema is fitted with Real D (also known as Disney Digital 3D technology) in screen 7, and is also capable of showing IMAX films. The cinema held the Scottish Pink Carpet Premiere of Universal Pictures film "Wild Child" on 30 July 2008. Both stars of the film, Emma Roberts and Alex Pettyfer, attended.

In December 2011, SNO! Zone Braehead was acquired by the Ice Factor Group and renamed Snow Factor.

It can be reached from Junctions 25a (westbound) and 26 (eastbound) of the M8 motorway, and has extensive public transport connections including its own bus station. Buses run from many areas linking Braehead to Largs, Greenock, Paisley, Glasgow, Erskine and Johnstone. The Pride of the Clyde ferry service ran from Glasgow City Centre to Braehead's pier down the River Clyde regularly until October 2007.

After opening in 1999, Braehead was the subject of a boundary dispute between the Glasgow and Renfrewshire council areas, as originally the council boundary line divided the shopping centre in two. In 2002, a Local Government Boundary Commission ruling eventually redrew the boundary to include all of the centre in Renfrewshire, as this was the original ancient boundary. The boundary runs along Kings Inch Drive and is marked by a chain linked fence at this point.

All content from Kiddle encyclopedia articles (including the article images and facts) can be freely used under Attribution-ShareAlike license, unless stated otherwise. Cite this article:
Braehead Facts for Kids. Kiddle Encyclopedia.