Kids Encyclopedia Facts
This page is about the hill in Scotland. For the drink, see Tinto de verano. For the Portuguese wine grape, see Tinto (grape). For the Italian wine grape that is also known as Tinto, see Bonamico (grape). 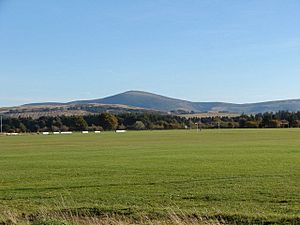 Tinto is an isolated hill in the Southern Uplands of Scotland. It comprises little more than one top, which stands on the west bank of the River Clyde, some 8 kilometres (5 mi) west of Biggar. The peak is also called "Tinto Tap", with the name Tinto possibly deriving from the Scottish Gaelic word teinnteach, meaning "fiery", which may refer to its ancient past as a look out beacon. Further known as the "Hill of Fire" it is also suggested exposed red hue felsite rock visible in many places on the hill helped gave rise to this name due to the effect seen when a setting sun illuminates the hillside.

At the summit sits "Tinto Cairn", and with a diameter of 45 m (148 ft) and a height of 6 m (20 ft) it is one of the largest Bronze Age round cairns in Scotland, most of which are found at lower elevations.

An old Scots children's rhyme tells of the "kist in the mist" at "Tintock tap", kist being the Scots word for "chest".

It is accessible for walking and is one of the premier locations for hanggliding and paragliding. Tinto is located near the small villages of Thankerton and Wiston.

Tinto is also the venue for one of the most popular hill running races in Scotland which is held annually in November.

Tinto Hill was painted by John Pairman in 1841.

All content from Kiddle encyclopedia articles (including the article images and facts) can be freely used under Attribution-ShareAlike license, unless stated otherwise. Cite this article:
Tinto Facts for Kids. Kiddle Encyclopedia.