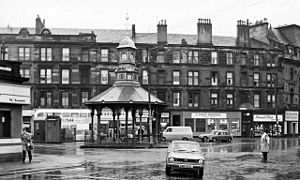 Bridgeton (Scots: Brigtoun, Scottish Gaelic: Baile na Drochaid) is a district to the east of Glasgow city centre. Historically part of Lanarkshire, it is bounded by Glasgow Green to the west, Dalmarnock to the east and south and Calton to the north-west at Abercromby Street/London Road. It used to be bounded by a village named Mile-End to the north, however this district seems to have vanished over the years, resulting in Bridgeton's boundary moving north to Crownpoint Road. It started as a small weaving village in 1705, when the third John Walkinshaw marked out a portion of his Goosefauld estate for rent. However, not much interest was shown until 1775 when Rutherglen Bridge was built over the River Clyde and the area became known as Bridge Town (or Brig Toun in Scots). A major employer was carpet manufacturer James Templeton & Co.

For many years Bridgeton has been the centre of the Orange Order in Scotland. Their marches are a common sight in Glasgow during the summer months but reach a peak around the Twelfth of July when the celebrations commemorating the Battle of the Boyne are in full flow.

The Glasgow Vintage Vehicle Trust, one of the largest voluntary commercial and passenger vehicle preservation groups in Scotland are based at Bridgeton Bus Garage which opened on 5 June 1965 on a site bordered by London Road to the south, Fordneuk Street to the West, Broad Street to the north and Rimsdale Street to the east. It replaced the former tram depot at Dalmarnock which had suffered fire damage.

Bridgeton's use as a Glasgow Bus Garage was brief, the tendency was to use a smaller fleet of larger buses and that led to the garage being closed in 1976, however it was then taken on by Strathclyde Regional Council for its Internal Transport fleet, servicing everything from light vans to Gritting Lorries. In this capacity it later passed to Glasgow City Council who when they ceased using it for that purpose were prevailed upon to rent it out for vehicle preservation.

All content from Kiddle encyclopedia articles (including the article images and facts) can be freely used under Attribution-ShareAlike license, unless stated otherwise. Cite this article:
Bridgeton, Glasgow Facts for Kids. Kiddle Encyclopedia.