Kids Encyclopedia Facts
This page is about the area of Glasgow, Scotland. For the locality in Alberta, Canada, see Northern Sunrise County.

Springburn (Scottish Gaelic: Allt an Fhuairainn) is an inner-city district in the north of the Scottish city of Glasgow, made up of generally working-class households.

Springburn developed from a rural hamlet at the beginning of the 19th century. Its industrial expansion began with the establishment of a chemical works by Charles Tennant on the newly opened Monkland Canal at nearby St. Rollox in 1799, which later became part of the United Alkali Company.

Later in the 19th century, the construction of railway lines through the area led to the establishment of railway works and the village became a parish in its own right. The Garnkirk and Glasgow Railway first opened in 1831 to supply the St. Rollox Chemical Works and the Edinburgh & Glasgow Railway was opened in 1842. Later, the City Union Line was extended to Springburn in 1871, and the Hamiltonhill Branch Line opened in 1894.

Initially located outside the Glasgow boundary, the core area was eventually absorbed by the city in 1872 and other parts in 1891. In the early 21st century, it forms part of the Springburn/Robroyston ward under Glasgow City Council.

Map of North Glasgow in 1923, including Springburn 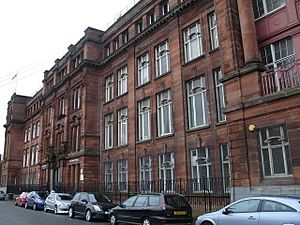 Former headquarters of the North British Locomotive Company in Springburn was designed by James Miller and completed in 1909. From 1961 the building was the campus of North Glasgow College and was converted into an office complex in 2009.

The area's economic development has a strong historical link to heavy industry, particularly railways, with the manufacturing of locomotives. In the past, Springburn's locomotive industry had a 25% global market share.

St. Rollox became the largest works, and is the only one still in operation today, after the collapse of the North British Locomotive Company in 1962 and the closure of Cowlairs in 1968. In 2007 Railcare limited, who also own the Wolverton Railway Works site in Milton Keynes, took over operations at St. Rollox, from Alstom, who had originally acquired the works from BREL in the wake of the railway privatisation. After a significant refurbishment programme, the site currently operates as a Rolling stock repair and maintenance facility. The former Eastfield Running Sheds are now operated as a maintenance depot by First ScotRail and part of the former Cowlairs carriage sidings is now operated as a signalling and maintenance depot by Network Rail.

Another large industrial company operating in Springburn is Promat UK, which manufactures Passive fire protection materials at the Germiston Works on Petershill Road. 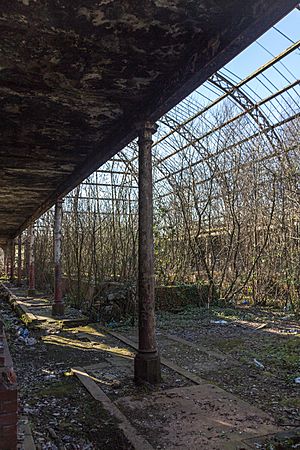 The derelict A-listed Winter Gardens at Springburn Park, August 2008. Completed by Simpson & Farmer for the Reid family in 1900, in return for the Glasgow Corporation's agreement to construct the Springburn Public Halls. The building has lain derelict since Glasgow District Council applied to demolish the structure in 1985, due to rising maintenance costs. The largest structure of its kind in Scotland, the Springburn Winter Gardens is approximately 180 ft long and 9060 sq. ft. (842 sq. m.) in area.

The highest point in Springburn and of the City of Glasgow is its famous park on Balgrayhill, 364 feet above sea level. Springburn Park was opened by Glasgow Corporation in 1892 and laid out to a design by the City Engineer, Alexander B. McDonald. James Reid, a business colleague of locomotive manufacturer Walter Neilson, gifted a bandstand, built by the Saracen Foundry, to the park in 1893. His son Sir Hugh Reid of Neilson, Reid and Company's Hyde Park Works also gifted the lands of the adjacent Cockmuir Farm for the park to be extended to the east in 1900. It was at this time that the Reid family funded the construction of the Park's spectacular Winter Gardens, a £12,000 gift from Hugh Reid of the Hyde Park Works, as part of an arrangement for Glasgow Corporation to build a Public Hall in Springburn, both buildings however are currently derelict. A statue in honour of James Reid was erected in the park by public subscription in 1903.

Stobhill Hospital was later built adjacent to the park in 1904. Mosesfield House, situated in the park, was also the site where George Johnston built Britain's first Motor Car in 1895, which eventually grew to become the Arrol-Johnston company.

The Barnhill Poorhouse, had also opened at Springburn in 1850. Paupers who could not support themselves were sent here by the Parish and were obliged to work at jobs such as bundling firewood, picking oakum (separating tarred rope fibres) and breaking rocks. In 1905 the Glasgow Poorhouse in Townhead closed and its inmates went to Barnhill, making it the largest poorhouse in Scotland. In 1945 it was renamed Foresthall Home and Hospital and was thereafter used as a geriatric hospital and residential home. It was demolished in the late 1980s and a private housing development now stands on the site.

Local football team Cowlairs were a founder member of the Scottish Football League in 1890 but were bankrupt by 1896. Another local team, Northern also played in the SFL for a single season in the 1890s. Petershill was founded in 1897 and continues to play today at New Petershill Park, a modern stadium with a 2,000 capacity, including a 562-seat stand. 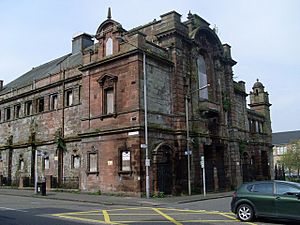 The derelict B-listed former Springburn Public Halls, April 2009. The building, a gift to the community from the Reid family of Neilson, Reid and Company, was opened in 1902 and later used as Springburn Sports Centre from 1960, until it was closed by Glasgow District Council due to dry rot problems in May 1985. Although still owned by Glasgow City Council, a proposal by Spectrum Properties in 2009 to convert the building into an office complex and childcare centre was awarded planning permission but never went ahead, due to financing problems. The building was suddenly demolished by Glasgow City Council on 27 December 2012. 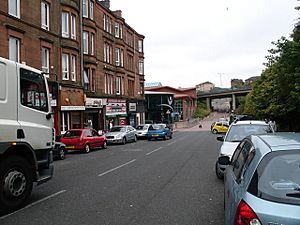 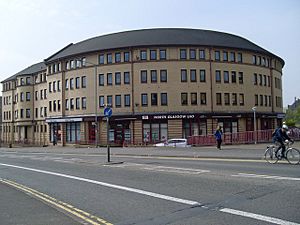 Modern tenement housing, constructed by the North Glasgow Housing Association at the former Springburn Cross in the early 1990s.

Springburn continued to see expansion, with the area incorporating housing schemes that were developed in the Interwar period, such as Balornock and also Post-war housing schemes such as those in Balgrayhill, Barmulloch and Sighthill. Barmulloch also included the High rise development at Red Road.

The old urban centre of Springburn was heavily affected by the redevelopment of the area from the early 1970s to the early 1980s. Selected as one of Glasgow's "Comprehensive Development Areas", Springburn saw the demolition of 85% of buildings in the district and the construction of a sequence of housing estates which transformed the area completely. A major dual carriageway, the A803 Springburn Expressway (originally designed to be the northern link to the aborted Glasgow Inner Ring Road) was completed as late as 1988. The handful of Victorian villas which remain around Balgrayhill and some sandstone tenements in Keppochill and central Springburn are only a fraction of what formed the dense urban community that had gone before. There are however various suburban middle class areas such as Forest Hall, Fernbank and Colston, which were largely unaffected by the redevelopment.

The regeneration vision remained incomplete, and by the mid-1980s Springburn had become one of Glasgow's most notorious areas, exacerbated by decaying housing and lack of major employers to replace the decline in the railway industry, despite the creation of North Glasgow College (now Glasgow Kelvin College) at the former North British Locomotive Company headquarters in 1965. Since then, there has however been further efforts to regenerate the area.

More recently the area of Keppochill Road, which links Springburn with Possilpark, has been regenerated through the work of the West of Scotland Housing Association Ltd, many of the Victorian sandstone tenement flats in Gourlay Street, Carlisle Street and Keppochill Road have been renovated and work continues to maintain and improve housing in the area.

New build developments in recent years has seen Glasgow Housing Association high-rise flats demolished or refurbished and new modern low rise houses built in the area. West of Scotland housing Association now has a head office based at 252 Keppochill Road however the interest of the charitable organisation extends into Ayrshire and Lanarkshire. The most notable surviving architectural feature in this area, the former Public Halls, was opened in 1902 and designed by William B. Whitie, who also designed Springburn's Public Carnegie library, which latterly formed Springburn Museum till it was closed in 2003. Since closing in the mid-1980s, the Springburn Public Halls fell into a state of chronic dereliction and were demolished in December 2012. The Springburn Library building now operates as the Glasgow North Regeneration Agency Conference Centre following a £2m refurbishment.

The Springburn area is served by Springburn railway station and Barnhill railway station, offering regular commuter services on the North Clyde and Cumbernauld lines of the Glasgow suburban rail network. The area is also served by numerous bus routes.

All content from Kiddle encyclopedia articles (including the article images and facts) can be freely used under Attribution-ShareAlike license, unless stated otherwise. Cite this article:
Springburn Facts for Kids. Kiddle Encyclopedia.