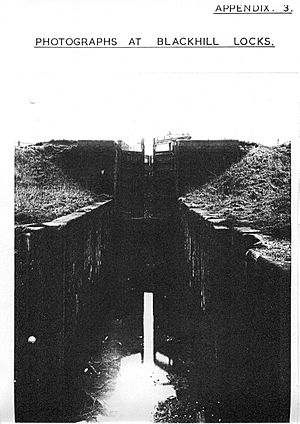 Blackhill Locks on the Monkland Canal 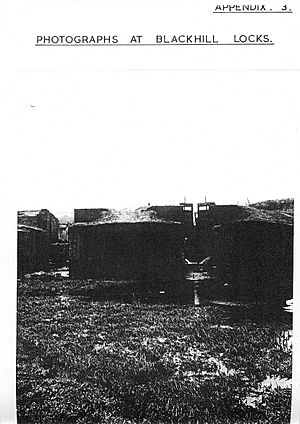 Blackhill (Gaelic: Cnoc Dubh) is an area of north east Glasgow, Scotland. It was developed as a council housing estate in the 1930s. Most of the new development was designated Rehousing, the lowest grade of council housing intended for those cleared from Glasgow's 19th century slums, particularly those in the Garngad (now Royston) area. The new buildings were three-storey, slate-roofed tenements built of reconstituted stone. The western side of Blackhill, near Riddrie, was designated Intermediate, a grade up from Rehousing, and housing was of the cottage flat-type with front and rear gardens and a measure of landscaping in the streets. "Rehousing" areas cost £250 per house to build, while "Intermediate" areas cost £1000.

Blackhill was built on a country golf course (see Glasgow Golf Club), near the Monkland Canal (with its remarkable Blackhill locks). Many early residents report summers of country rambles, often along the Molendinar Burn – now the only place this historic burn is still visible on the surface – to the loch at Hogganfield. There was (and is) a strong sense of neighbourliness, partly encouraged by the enclosed nature of the site, due to industry, railways and main roads cutting it off from other districts. It was, however, built close to a gasworks and a distillery, which did not add to the health of the area and, perhaps for this reason, it gained a reputation for being "difficult to let". Nearby is a prison, HM Prison Barlinnie, which may also have encouraged negative evaluations of the area. The area has been comprehensively redeveloped in recent years, with much of its housing stock having been demolished and replaced with improved stock. A recent community survey reported residents' concerns were similar to those in other urban areas:

"In the last issue we reported the findings of a local survey that helped to pinpoint the top 10 priority issues for your neighbourhood – things like road safety, litter and vandalism, dog fouling, dumping and youth disorder all featured strongly."

All content from Kiddle encyclopedia articles (including the article images and facts) can be freely used under Attribution-ShareAlike license, unless stated otherwise. Cite this article:
Blackhill, Glasgow Facts for Kids. Kiddle Encyclopedia.