Newton Mearns (Scots: The Mearns; Scottish Gaelic: Baile Ùr na Maoirne) is a suburban town and the largest settlement in East Renfrewshire, Scotland. It lies 7 miles (11 km) southwest of Glasgow City Centre on the main road to Ayrshire, 410 feet (125 m) above sea level. It has a population of approximately 26,993, stretching from Whitecraigs and Kirkhill in the northeast to Maidenhill in the southeast, to Westacres and Greenlaw in the west and Capelrig/Patterton in the northwest.

It is part of the Greater Glasgow conurbation. Its name derives from being a new town of the Mearns (from Scottish Gaelic "a' Mhaoirne" meaning a stewartry).

Until the 20th century, the land around Newton Mearns was primarily agricultural. Ownership passed from the Pollocks (whose name is perpetuated in the nearby Glasgow housing estate of Pollok) to the Maxwells of Caerlaverock around 1300. It then passed to the Maxwells of Nether Pollok in 1648 and then the Stewarts of Blackhall in 1660. A new turnpike road from Eastwood Toll, now the main Ayr Road, was constructed in 1832. The 1893 'Ordnance Gazetteer of Scotland' describes it as "pleasantly situated on a rising ground 410 feet above sea-level". It also reveals that it was a 'burgh of barony' which bestowed the right to hold a weekly market and two annual fairs. However, the Gazetteer also describes the village as being only a "single street on the Glasgow and Kilmarnock highroad" By the end of the 18th century quarrying had developed and more importantly numerous textile mills and finishing works became established availing themselves of the numerous rivers and lochs for water supply.From the early 20th century, with the introduction of improved roads and railways to the area, it gradually became a growing commuter suburb of Glasgow. In the 1930s, between speculative and local authority housing ventures, a further 6,000 houses were added to the area and after a lull during the war years, in the 1950s, house building began again in earnest. Unfortunately, the old core village suffered neglect during and after WW2 and was all but derelict by the 1960s. It was purchased and turned into a shopping centre which was later to become 'The Avenue at Mearns' in 1991.

Historical buildings in the area include the 15th century Mearns Castle, Greenbank House owned by the National Trust for Scotland and the 1813 Mearns Kirk.

Traffic through the town was reduced significantly after the new M77 motorway was opened in the late 1990s. Transport links improved further in May 2006 with the opening of the Glasgow Southern Orbital dual carriageway, and its connection to the M77.

As well as minor and major roads, the town has bus links with the centre of Glasgow, Kilmarnock, and Ayr. The town is served by two local railway stations, Patterton and Whitecraigs which run trains to Glasgow Central station amongst others.

Newton Mearns contains a number of parks, including Broomburn Park, Mearns Park, Crookfur Park & Parklands Country Club and nearby Rouken Glen Park with its boating pond, gardens and leisure facilities. There are numerous golf clubs, a golf academy, a tennis club, bowling club and rugby club. A public swimming pool and leisure centre is located at Eastwood Park in nearby Giffnock, and the swimming pool and sports centre at Eastwood High School is open to the public. Between Mearns and Barrhead lie the former reservoirs and water runs of the Gorbals Water Works, pioneered in the 19th century, before the building of the Loch Katrine Water Works. The reservoirs and surrounding parklands now form the Dams to Darnley Country Park.

The biggest football club near Newton Mearns is the Junior club, Pollok F.C.. The club's home stadium is situated in Shawlands. Newton Mearns also has an amateur football club, Newton Mearns Rovers A.F.C. Established in 1962, the club is managed by Greig Taylor and competes in the Caledonian Amateur Football League. Newton Mearns has a Freemason's lodge, Lodge Newton Mearns No 1706, that meets in the Fairweather Hall, on Barrhead Road. 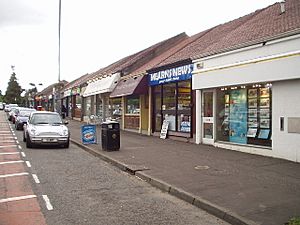 Newton Mearns is primarily a residential area, with most of its inhabitants travelling by car or public transport to Glasgow for employment and shopping. However, there are a number of small businesses in the area, as well as an indoor shopping centre.

The 120 homes in the Hugh Fraser Retirement Estate have been fitted with smart technology and sensors, giving residents control of heating, lighting and doorbells using Amazon Alexa, its first use in an assisted living setting for a Scottish retirement community.

Farming continues to be important to the south of Mearns Cross and stretching to Fenwick and Eaglesham Moors. A major Bleach Works and textile finishing centre was constructed at Netherplace. The empty building was demolished in 2016 after it was the source of a major fly infestation across Newton Mearns and Clarkston. The site where the building was is visible from the M77 motorway.

Mearns has nine primary schools and four high schools, including one independent school: The neighbouring town of Giffnock has the local Roman Catholic high school of St Ninians High School.

All content from Kiddle encyclopedia articles (including the article images and facts) can be freely used under Attribution-ShareAlike license, unless stated otherwise. Cite this article:
Newton Mearns Facts for Kids. Kiddle Encyclopedia.