Clarkston (Scots: Clairkstoun, Scottish Gaelic: Baile Chlarc) is a suburban town in East Renfrewshire, in the Central Lowlands of Scotland. It lies 4.7 miles (7.6 km) east of Barrhead, 7.2 miles (11.6 km) east-southeast of Paisley and 3.9 miles (6.3 km) northwest of East Kilbride. A small dormitory town with a population of 14,944, Clarkston is on the southern fringe of the Greater Glasgow conurbation and directly adjoins the neighbouring suburbs of Busby, Giffnock and Stamperland.

On 21 October 1971, the shopping centre was the scene of the Clarkston explosion, which killed 22 people and injured around 100. A plaque on the site commemorates the event.

Greenbank Garden, a National Trust for Scotland property, is located on the outskirts of Clarkston.

When a new road from Paisley to East Kilbride was built through the area in the 1790s, a toll point was set up where it crossed what was then the main route from Glasgow to Kilmarnock. A man named John Clark built a house at the toll, and the name 'Clarkston' came to be used for the locality. The Maxwell family (owners of the Williamwood Estate, on which Clarkston was situated) advertised the creation of a new village there in 1801, but initially it grew slowly. Clarkston at this time had no industry of its own, and villagers were mainly employed in the mills at nearby Netherlee.

The area began to expand more rapidly following the opening of Clarkston railway station by Busby Railways in the village in 1866, and later the expansion of the Glasgow tram network to Clarkston in 1921. The 1920s also saw the final breaking up of the Williamwood Estate, encouraging further house building. Clarkston expanded rapidly as new suburban housing developments sprang up such as Williamwood, Carolside and Overlee.

Clarkston experiences a temperate maritime climate, like much of the British Isles, with relatively cool summers and mild winters. Regular but generally light precipitation occurs throughout the year.

Clarkston is a postal district within the post town of Glasgow in the G postcode area. Clarkston consists of postcode district G76, which also extends beyond the town boundary to include neighbouring settlements Busby, Carmunnock, Eaglesham and Waterfoot.

According to the United Kingdom Census 2001, the census locality (town and sub-area) of Clarkston had a total resident population of 19,944, or 21% of the total of East Renfrewshire. The median age of males and females living in Clarkston was 38 and 41 respectively, compared to 37 and 39 years for those in the whole of Scotland. Fifty nine percent were married, 3.7% were cohabiting couples, 7.0% were lone parent families and 23.2% of households were made up of individuals.

The place of birth of the towns residents was 97.1% United Kingdom (including 91.8% from Scotland), 0.5% Republic of Ireland, 0.5% from other European Union countries and 1.9% from elsewhere in the world. Compared with the average demography of Scotland, Clarkston has higher proportions of people born in Scotland and young children (0–15 years old).

Greenbank Garden is a National Trust for Scotland property situated on Flenders Road, consisting of the 18th century Greenbank House and its walled gardens. The house is a Category A listed building. 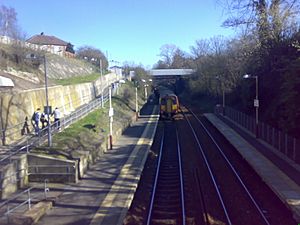 The area has a number of high-volume road links to neighbouring Glasgow. The A77 main Glasgow to Kilmarnock road passes through the Giffnock nearby and is connected to the A727 from Paisley to East Kilbride, which passes through the centre of Clarkston, at the Eastwood Toll. The nearest motorway is the M77, of which Junction 3 at Darnley is the interchange for Clarkston.

Clarkston lies within the Strathclyde Partnership for Transport Passenger transport executive and is served by two railway stations, both of which are managed by First ScotRail:

Clarkston is serviced by a number of bus routes by various operators. The main bus link to the city is the number 4 line operated by FirstGroup, which runs at least every 10 minutes throughout the day.

All content from Kiddle encyclopedia articles (including the article images and facts) can be freely used under Attribution-ShareAlike license, unless stated otherwise. Cite this article:
Clarkston, East Renfrewshire Facts for Kids. Kiddle Encyclopedia.