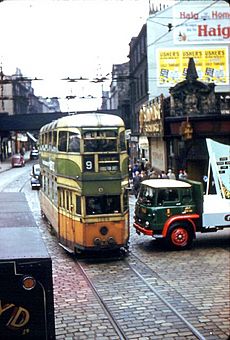 A "Coronation" tram in Argyle Street, Glasgow, in June 1962, three months before the final closure of the system 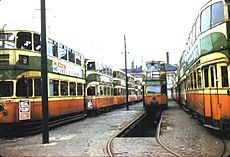 Glasgow trams in 1962, shortly before final withdrawal of services (Cunarder on the left, Coronation in middle row)

Glasgow Corporation Tramways were formerly one of the largest urban tramway systems in Europe. Over 1000 municipally-owned trams served the city of Glasgow, Scotland. The system closed in 1962 and was the last city tramway in Great Britain (prior to the construction of new systems in the 1990s).

All content from Kiddle encyclopedia articles (including the article images and facts) can be freely used under Attribution-ShareAlike license, unless stated otherwise. Cite this article:
Glasgow Corporation Tramways Facts for Kids. Kiddle Encyclopedia.