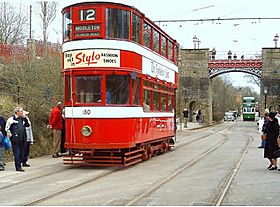 The museum has working trams in an old style street setting. This is a 1931 double-decker Leeds tram and is about to pass under the Bowes-Lyon Bridge

Crich Tramway Village is an open-air museum of trams and tramways, in Crich,, Derbyshire, England. It is the home of the National Tramway Museum. It is set up as an Edwardian village and has a street with shops which include a sweet shop, café and gift shop. Other buildings in the open-air museum are the Red Lion Pub from Stoke-on-Trent, Derby Assembly Rooms, Burnley Tramways Offices and the tram sheds and displays. There are tram lines which go out for about 1 mile (1.6 km) from the village. There is also a collection of old street furniture from around the United Kingdom.

The trams that are in the museum used to run on tramlines along the streets of different towns and cities. Most of the trams at Crich were used in the United Kingdom before the 1960s. Some are from other countries. Many were saved and restored after the tram services in the cities stopped. 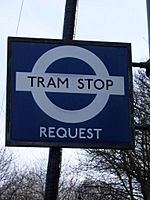 Before World War II, tramways were an important type of public transport in many cities in the United Kingdom. (Trams pulled by horses began to be built in the late 19th century.) After World War II, they began to close. Many people thought that the trams and tramways got in the way of motor cars and buses and that fuel for buses was costing less than the cost of making electricity. Most tram networks in the United Kingdom had closed by 1962. Only one remained in use, the Blackpool tramway which still runs today.

In 1948, a group of tramway enthusiasts decided to buy an open top tram that they had been on during the last tram ride of Southampton Tramways. For just £10, they bought Southampton No. 45, Although there were trams and locomotives in British museums, there were no working museums or heritage railways in Britain at this time, so at first the idea of amateurs running a tramway or railway seemed impossible. In 1955 the Tramway Museum Society was started and in 1959, the Society chose a place for the museum after a very long search. The site was found by the Talyllyn Railway Preservation Society when they were taking apart the old track from George Stephenson's railway for a project in Wales.

A 1925 tram from Leeds at the tram terminus

In the 1840s, when Stephenson was building the North Midland Railway from Derby to Rotherham and Leeds, he had found coal buried under the ground on the way to Clay Cross. He decided to mine it and make some money. Crich already had a limestone quarry when he started. Stephenson saw that he could use this limestone and coal to make burnt lime for agricultural use and then use his railway to move it. To link the quarry at Crich to the limekilns at Ambergate, a new metre gauge railway was built, which is said to be the first in the world. The museum is built on part of the old Cliff Quarry, which Stephenson's company bought.

After the Tramway Museum Society's members visited the quarry, they bought part of the site and buildings. Since buying them, the society has gotten many trams, as well as getting track and power for the trams. Many of the tramcars were also repaired. In 1967, the society decided that they would start a village around the tramway, as trams did not run in limestone quarries. This was the start of Crich Tramway Village. The museum got lots of street furniture, and even some entire buildings. Many of these buildings have been changed to hold the museum's collections of books, pictures, and archives.

In 1962 the Tramway Museum Society became a company and a year later it was listed as an educational charity. Since then, the society has grown with the help of people all over the world. The Secretary of State for Culture, Media and Sport said that the museum has a very good collection. It was one of the first 26 museums that was told this in 1995.

Since the start of the 2000s, the work of the museum's volunteers and the income earned by visitors has been added to by grants from the Heritage Lottery Fund The museum is still an independent charity; this means that the government does not pay for it.

In the early 1990s, the government of the United Kingdom decided that trams were a way of stopping the traffic problems in the UK. New light rail systems, or "second generation tramways", opened in cities like Manchester, Sheffield and Nottingham. Twenty years later more systems are being built, like the one in Edinburgh. 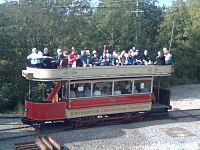 Southampton 45 at Glory Mine 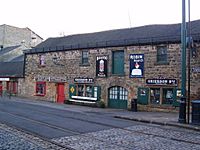 A 1969 Berlin tram leaving Wakebridge. This picture was taken at "Red Oktober 2007", one of many special days at the museum.

Most of these tramcars are double-deckers and some have open-tops.

The museum has about fifteen fully working tramcars. Every day that the museum is open, one to four of those trams are in service on the mile long line. There is also a 1969 Berlin tram that has been changed into an "Access Tram".

Many of the trams can be seen at the museum. Some, such as Blackpool Dreadnought 59 and Blackpool OMO 5, are stored in the Museum's depot at Clay Cross. 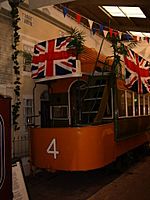 The museum has trams using four different types of operation – horse, steam, diesel and electricity. Electricity is used for most of the service trams and works cars, but for one weekend each year a horse tram runs. The museum has five horse trams, Leamington & Warwick 1, Chesterfield 8, Oporto 9, Sheffield 15 and Cardiff 21, but only Sheffield 15 is used. The rest are on display. The museum also has a steam tram engine on display.

All content from Kiddle encyclopedia articles (including the article images and facts) can be freely used under Attribution-ShareAlike license, unless stated otherwise. Cite this article:
Crich Tramway Village Facts for Kids. Kiddle Encyclopedia.