Education in Scotland facts for kids

Kids Encyclopedia Facts
Not to be confused with Education Scotland.

Scotland has a long history of universal provision of public education, and the Scottish education system is distinctly different from those in the other countries of the United Kingdom. The Scotland Act 1998 gives the Scottish Parliament legislative control over all education matters, and the Education (Scotland) Act 1980 is the principal legislation governing education in Scotland.

Following this, Scottish universities generally have courses a year longer (typically 4 years) than their counterparts elsewhere in the UK, though it is often possible for students to take more advanced specialised exams and join the courses at the second year. One unique aspect is that the ancient universities of Scotland issue a Master of Arts as the first degree in humanities.

State schools are owned and operated by the local authorities which act as Education Authorities, and the compulsory phase is divided into primary school and secondary school (often called high school). Schools are supported in delivering learning and teaching by Education Scotland (formerly Learning and Teaching Scotland).

There are also private schools across the country, although the distribution is uneven with such schools in 22 of the 32 Local Authority areas. At September 2011 the total pupil population in Scotland was 702,104, of which 31,425 pupils, or 4.5%, were being educated in independent schools.

Qualifications at the secondary school and post-secondary (further education) level are provided by the Scottish Qualifications Authority, which is the national awarding and accrediting body in Scotland, and delivered through various schools, colleges and other centres. Political responsibility for education at all levels is vested in the Scottish Parliament and the Learning Directorate.

In 2014, research by the Office for National Statistics found that Scotland was the most highly educated country in Europe and among the most well-educated in the world in terms of tertiary education attainment, above countries like Finland, Ireland and Luxembourg, with roughly 40% of Scots aged 16–64 educated to NVQ level 4 and above. 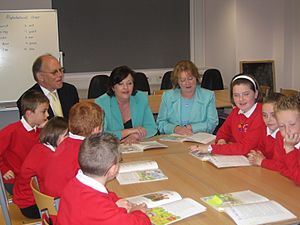 Pupils remain at primary school for seven years. Then aged eleven or twelve, they start secondary school for a compulsory four years with the following two years being optional. In Scotland, pupils sit National 4/5 exams (previously Standard Grade or Intermediate exams) at the age of fifteen/sixteen, for normally eight subjects including compulsory exams in English and Mathematics. A Science subject (Physics, Biology or Chemistry) and a Social Subject (Geography, History or Modern Studies) were also compulsory, but this was changed is accordance with the new curriculum. It is now required by the Scottish Parliament for students to have two hours of physical education a week; each school may vary these compulsory combinations. The school leaving age is generally sixteen (after completion of National 4/5s), after which students may choose to remain at school and study for Higher and/or Advanced Higher exams.

A small number of students at certain private, independent schools may follow the English system and study towards GCSE instead of National 4/5s (Standard Grades), and towards A and AS-Levels instead of (or alongside) Higher Grade and Advanced Higher exams. The International Baccalaureate has also been introduced in some independent schools.

The table below lists rough equivalences with the year system in the rest of the United Kingdom (For England and Wales, the equivalence given is for children born before 1 September; the equivalence for those born from September to February [December for deferred pupils] is given in brackets):

Government funded schools are free for children aged 5–19. In many cases, this applies to children of international post-graduate students, and other immigrants.

The age ranges specify the youngest age for a child entering that year and the oldest age for a child leaving that year. Playgroup can be described as a daycare centre for toddlers, then children may go on to attend an early years centre as soon as they have passed their third birthday, and progress to Primary 1 in the August of the year in which they turn five. In general, the cut-off point for ages is the end of February, so all children must be of a certain age on 1 March to begin class in August. All parents of children born between September and February (i.e. still 4 years old on the school start date) are entitled to defer entry to Primary School if they believe their child is not ready for school. Only children whose birthdays fall in January or February will be considered for funding for a subsequent year at an early years centre, unless there are special circumstances. Children may leave school once they reach their statutory school leaving date; this is dependent on date of birth. For children born between 1 March and 30 September, this date is 31 May of their 4th year of secondary school. For children born between 1 October and 28 February, the last day of June is the first date they may leave school if they have a placement at college and the school have signed the health & safety forms.

Which high school the child goes to depends on the area they live in, known as the "Catchment Area" which has a specific high school which takes children. Parents can also apply for a placement request if they would like their child to attend a school outside their Catchment area and a panel will decide if the child is the most worthy (out of all placing requests) to take one of the spaces left after all children from the catchment area have been taken.

The table below lists list the numbers of children, schools and teachers in all publicly funded schools:

Home education is also legal in Scotland. Parents wishing to home educate do not need the permission of the Local Authority unless the children are already registered at a school. There are no exact numbers available for children being educated at home in Scotland.

In 2003, work began on an education reform program, to produce a new Curriculum for Excellence that would replace existing guidance on the school curriculum.

Curriculum for Excellence was launched in Scottish secondary schools from school session 2012–2013.

Pupils can go to university at the end of S5, as Highers provide the entry requirements for Scottish universities where degrees are normally four years long; however, recently it is more common for students to remain until S6, taking further Highers and/or taking Advanced Highers. The majority of English universities, the most popular choice for Scottish students who wish to study university degrees outside of Scotland, require Advanced Higher qualification levels as these are deemed by the English universities to be most similar to A-levels.

Other schools include The Community School of Auchterarder, Auchterarder, Perth and Kinross; The Nicolson Institute, Stornoway, Western Isles; North Walls Community School on Hoy, Orkney Islands and Wester Hailes Education Centre, Wester Hailes, Edinburgh. All of these are, equally, fully comprehensive non-selective schools, differing only in designation from all other state secondary schools in Scotland.

The vast majority of schools are non-denominational, and include the parish schools, pioneered by the Church of Scotland and other Protestant Churches, which became state schools in 1872. Religious education is taught in non-denominational schools and in denominational schools. Of over 2,500 schools in Scotland there are 366 state schools which are Roman Catholic, three Episcopalian and one Jewish.The Education (Scotland) Act 1918 brought Roman Catholic schools within the State education system, ensuring the promotion of a Roman Catholic ethos within such schools.

Music Education is available at several levels. Formal music education begins at 4½ years and can progress as high as postgraduate studies. Music Education can take place within a Scottish Music school; through a music service or privately.

Some schools in Scotland provide education given in the Scottish Gaelic language. They are mainly located in the main cities of Scotland and in areas with higher amounts of Gaelic speakers. Gaelic medium education is becoming increasingly popular throughout Scotland, and the number of pupils who are in Gaelic medium education at primary school level has risen from 24 in 1985, to 2500 in the 2012–13 school year.

History of education in Scotland

All content from Kiddle encyclopedia articles (including the article images and facts) can be freely used under Attribution-ShareAlike license, unless stated otherwise. Cite this article:
Education in Scotland Facts for Kids. Kiddle Encyclopedia.