Balamory is a Scottish educational live-action children's programme on BBC One, BBC Two and CBeebies for pre-school children, about a fictional small island community off the west coast of Scotland, named Balamory. Four series were produced between 2002 and 2005 by BBC Scotland, with 254 episodes made (including a DVD-exclusive Christmas episode). The programme was created by Brian Jameson. 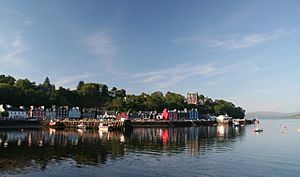 Tobermory, Mull, the setting for the fictional town of Balamory 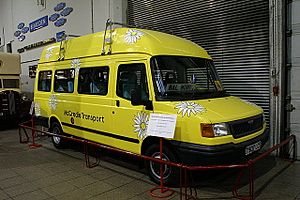 There are eight central characters in Balamory. Each character wears a distinctive colour of clothing and lives in a house of the same colour.

In every episode, a selection of songs are played, each depends on the character.

Beginning in Season 3, a new selection of songs was introduced, although the original songs were still used on occasion.

The opening credits show the town of "Balamory" with its brightly coloured houses. Miss Hoolie opens the nursery school, greets the nursery children, and talks about that day's weather. On a "play day" she visits Pocket & Sweet, the shop-cum-cafe.

For example, in one episode Josie Jump has been asked to look after a neighbour's rabbit, but does not know what it needs. She is advised to visit PC Plum, who advises her to feed it vegetables. She then goes to the shop run by Pocket and Sweet to buy rabbit food, and finally brings the rabbit to Miss Hoolie's nursery for the children to feed and pat it.

Each episode of Balamory contains at least five songs:

The programme was aimed at preschoolers. The show can also be seen in a humorous light. The characters in Balamory are somewhat naive and light hearted, often appearing to be children trapped in adult bodies with adult roles. The storyline revolves around simple problems designed to challenge pre-schoolers' minds.

A number of episodes feature guest actors in addition to the main characters and the nursery children. Terry Wogan made a guest appearance in one episode (The Game Show) as a television director. This episode also featured Greg Hemphill (Julie Wilson Nimmo's husband in real life) and John Altman, who plays Nick Cotton in the BBC soap opera EastEnders. Celebrity chef Keith Floyd appeared in Suzie Sweet's song "Suzie's Cookin'".

The show was first confirmed to be in production on February 11, 2002, under the title of Applecross.

Balamory was filmed mostly in Tobermory on the Isle of Mull, with the exception of scenes at Archie's castle filmed in East Lothian, and other scenes such as the nursery and the Mainland City, which were filmed in Glasgow.

In the United States, the series aired on TLC and Discovery Kids, as part of the Ready, Set, Learn! block from 2005 until 2007.

On 30 April 2005, the BBC announced that it would not order another season of the series, citing they wanted to experiment and create more new programme ideas. In that year, all the cast (except for three of them) performed a farewell touring show called "Balamory Live: Strike up the Band", a follow up to the "Balamory Live: What's The Story" tour from 2004. The show continued to be repeated on CBeebies until July 2016. By then only the first two series, series 1 and 2 respectively, continued to be repeated as the last two series could not be repeated due to licensing issues from 2010 onwards.

By the time the programme was retired, many of the cast were also keen to move on. Miles Jupp, who played Archie, stated that his role caused problems with his comedy career, with parents assuming his routines were age-appropriate. Julie Wilson Nimmo, who played Miss Hoolie, complained that she could not take her children to the local play area without being "mobbed." Mary Riggans, who played Suzie Sweet, died in 2013, having suffered a stroke the year before.

Andrew Agnew, who played PC Plum went on to direct the children's TV show Me Too! which shared the same similarities in concept as Balamory. Although set in Scotland, it is primarily set in a city rather than a coastal town.

All content from Kiddle encyclopedia articles (including the article images and facts) can be freely used under Attribution-ShareAlike license, unless stated otherwise. Cite this article:
Balamory Facts for Kids. Kiddle Encyclopedia.