Tobermory ( Scottish Gaelic: Tobar Mhoire) is the capital of, and until 1973 the only burgh on, the Isle of Mull in the Scottish Inner Hebrides. It is located on the east coast of Mishnish, the most northerly part of the island, near the northern entrance of the Sound of Mull. The village was founded as a fishing port in 1788; its layout was based on the designs of Dumfriesshire engineer Thomas Telford. It has a current population of about 1,000.

The name Tobermory is derived from the Gaelic Tobar Mhoire, meaning "Mary's well". The name refers to a well located nearby which was dedicated in ancient times to the Virgin Mary.

Legend has it that the wreck of a Spanish galleon, laden with gold, lies somewhere in the mud at the bottom of Tobermory Bay – although the ship's true identity, and cargo, are in dispute. By some accounts, the Florencia (or Florida, or San Francisco), a member of the defeated Spanish Armada fleeing the English fleet in 1588, anchored in Tobermory to take on provisions. Following a dispute over payment (or possibly, according to local folklore, a spell cast by the witch Dòideag), the ship caught fire and the gunpowder magazine exploded, sinking the vessel. In her hold, reputedly, was 300,000 GBP worth of gold bullion. Other sources claim the vessel was the San Juan de Sicilia (or San Juan de Baptista), which, records indicate, carried troops, not treasure. Whatever the true story, no significant treasure has ever been recovered in Tobermory Bay. The largest attempt made to locate the galleon was in 1950 when the then Duke of Argyll signed a contract with the British Admiralty to locate the galleon. Nothing came of the attempt, apart from the development of equipment still used today to locate ancient sunk vessels.

Due to similarities in sailing conditions, in the mid-1800s emigrant sailors created the community of Tobermory, located in Ontario, Canada. This namesake town has twin harbours, known locally as "Big Tub" and "Little Tub", which sheltered ships from the severe storms of Lake Huron. Big Tub Harbour is Canada's largest natural freshwater harbour. There are numerous shipwrecks nearby so it is a thriving SCUBA diving destination.

During World War II, Tobermory was home to Royal Navy training base HMS Western Isles under the command of the legendary Vice-Admiral Sir Gilbert Stephenson. The so-called Terror of Tobermory's biography was written by broadcaster Richard Baker, who trained under him.

Many of the buildings on Main Street, predominantly shops and restaurants, are painted in various bright colours, making it a popular location for television programmes, such as the children's show Balamory. The burgh hosts the Mull Museum, the Tobermory whisky distillery (and from 2005 to 2009 there was also a brewery, the Isle of Mull brewing company) as well as Mull Aquarium, the first catch and release aquarium in Europe. The clock tower on the harbour wall is a noted landmark. The town also contains an arts centre An Tobar, the management of which was merged with Mull Theatre in 2012 to form the umbrella arts organisation Comar. The theatre remains based just outside Tobermory in Drumfin and is used by youth and adult dance and drama groups, hosting a wide variety of performances.

Tobermorite, a calcium silicate hydrate found near Tobermory in 1880 was named after the town.

The visit of the composer Felix Mendelssohn in 1829, en route to Staffa, is commemorated in the annual Mendelssohn on Mull Festival in early July. Other highlights of the town's calendar include an annual Traditional Music Festival held on the last weekend in April, the local Mòd, which takes place on the second Saturday in September and has established itself as one of the best local Mòds on the circuit, the Mull Fiddler's Rally also in September, and the traditional Mull Highland Games held every summer.

The fictional town of Torbay in Alistair MacLean's novel When Eight Bells Toll was based on Tobermory, and much of the 1971 movie was filmed in the town and other parts of Mull. The writer Saki gave the name to a talking cat in one of his most famous short stories and two well-loved children's TV series have made use of the town's name. Elisabeth Beresford called one of the Wombles Tobermory and, more recently, the town played host to its almost-namesake Balamory for 3 years (2002–2005). Other films made in the area include the 1945 Powell and Pressburger classic I Know Where I'm Going!.

Ferries sail between Tobermory and the mainland to Kilchoan on the Ardnamurchan peninsula, but principal access to the island is via ferry between Oban and Craignure. Craignure is around 22 miles (35 kilometres) from Tobermory. This is the main route for visitors to the island. An additional ferry sails between Lochaline on the mainland and Fishnish. 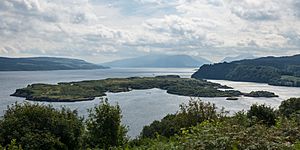 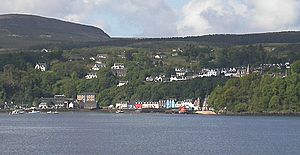 Tobermory, Mull – as viewed from the Sound of Mull 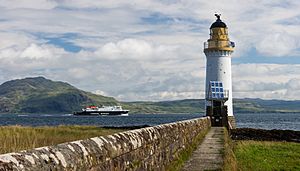 People born in Tobermory include Duncan MacGilp and Janet MacDonald, both past Gold Medal winners at Scotland's Royal National Mòd. Three generations of the town's MacIntyre family have achieved eminence: Colin MacIntyre is a singer-songwriter. His brother is BBC Scotland Sport's Kenny Macintyre; his late father, also called Kenny, was BBC Scotland Political Correspondent, while his grandfather was the so-called 'Bard of Mull', poet Angus MacIntyre. The late accordionist Bobby McLeod lived in the town from his birth in 1925 until his death in 1991, and owned the Mishnish Hotel.. The military surgeon Prof George Ritchie Thomson FRSE was born here in 1865.

Isabella Bird, the Victorian traveller and writer, frequently stayed in the town, where her sister Henrietta had a house. She often assisted the local doctor and, on at least one occasion, served as anaesthetist when he removed a tumour from a local woman. When Henrietta died, she funded the building of the clock tower as a memorial to her sister.

All content from Kiddle encyclopedia articles (including the article images and facts) can be freely used under Attribution-ShareAlike license, unless stated otherwise. Cite this article:
Tobermory, Mull Facts for Kids. Kiddle Encyclopedia.