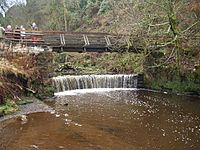 Calderglen Country Park is a country park in the Scottish town of East Kilbride. It is situated along the eastern edge of the town and is its principle greenspace and recreation area. The visitor centre and adjoining facilities centre on the 17th century Torrance House which is a Category A listed building, and the remains of its adjoining landscaped policies.

The central area of the park is approached from the old entrance lodge house via the tree-lined driveway of the old estate. The park comprises the gorge portions of the once much more extensive Calderwood and Torrance Estates, with Calderwood Glen occupying the northernmost stretch of the Rotten Calder Water, and Torrance Glen the south. Several miles of nature trails run through the park with the longest routes running along the western banks from Flatt in the south to the Hamilton to East Kilbride Expressway (A725) to the north. The northern part of the park is a site of special scientific interest for is carboniferous geology, and the river features a number of waterfalls along its course.

Calderglen is situated near to the industrial suburb of Kelvin, the established residential district of St. Leonards and a small 21st century development, Crutherland.

All content from Kiddle encyclopedia articles (including the article images and facts) can be freely used under Attribution-ShareAlike license, unless stated otherwise. Cite this article:
Calderglen Country Park Facts for Kids. Kiddle Encyclopedia.