Longton is one of the six towns which amalgamated to form the county borough of Stoke-on-Trent in 1910, along with Hanley, Tunstall, Fenton, Burslem and Stoke-upon-Trent. 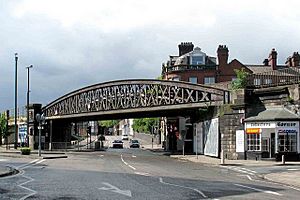 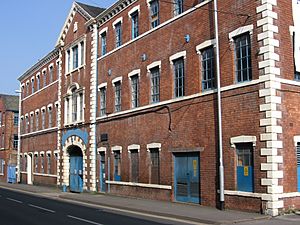 Longton ('long village') was a market town in the parish of Stoke in the county of Staffordshire. The town still has a market housed in an attractively renovated market hall.

Coal miners in the Hanley and Longton area ignited the 1842 General Strike and associated Pottery Riots.

In March 1865, Longton and Lane End were incorporated as the Borough of Longton. On 1 April 1910, the town was federated into the county borough of Stoke-on-Trent. In 1925 the area was granted city status. One legacy of Longton's administrative independence from 1865 to 1910 is Longton Town Hall, a prominent landmark in the town centre. In 1986 Longton Town Hall faced demolition by Stoke-on-Trent City Council amid considerable local protest. Work on stripping the interior had already begun before an injunction was brought and the building saved.

Together with Rochdale, then in Lancashire, Longton was host to the first Workers Educational Association tutorial classes. R.H. Tawney, known as "the patron saint of adult education", taught the classes for three years from January 1908. For a time, until he moved to Manchester in 1909, Tawney was working as part-time economics lecturer at Glasgow University. To fulfil his teaching commitments to the WEA, he travelled first to Longton for the evening class every Friday, before travelling north to Rochdale for the Saturday afternoon class.

Arnold Bennett referred to Longton as Longshaw in his novels centred on the Potteries towns. 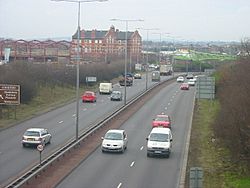 The A50 near to its cutting. The prominent building is the Sutherland Institute, Longton's library.

Longton is served by a railway station on the Crewe–Derby line. It was opened by the North Staffordshire Railway on 7 August 1848. A new bus interchange was opened adjacent to it in 2003 on the site of a former Co-op supermarket.

A new shopping precinct, the Bennett Precinct, opened in 1962. It is now named Longton Exchange.

In 2003 a large Tesco Extra superstore was built and has helped to rejuvenate the town. Since then, other major retailers such as Argos, Next, Pizza Hut, Matalan, Wilkinson and B & M have opened new premises.

Then, building firm St. Modwen's, opened an £8 million retail complex in April 2012. The stores there include McDonald's, Pets at Home, Smyths and Currys.

Other local business like Hylands Ltd ( www.hylands.tv ) and Bevans have also thrived in the area.

Together with Rochdale, then in Lancashire, Longton was host to the first Workers' Educational Association tutorial classes. R. H. Tawney, known as "the patron saint of adult education", taught the classes for three years starting in January 1908.

All content from Kiddle encyclopedia articles (including the article images and facts) can be freely used under Attribution-ShareAlike license, unless stated otherwise. Cite this article:
Longton, Staffordshire Facts for Kids. Kiddle Encyclopedia.