Leek is a market town and civil parish in the county of Staffordshire, England, on the River Churnet. It is situated about 10 miles (16 km) north east of Stoke-on-Trent. It is an ancient borough and was granted its royal charter in 1214.

It is the administrative centre for the Staffordshire Moorlands District Council. King John granted Ranulph de Blondeville, 6th Earl of Chester, the right to hold a weekly Wednesday market and an annual seven-day fair in Leek in 1207.

Leek's coat of arms is made up of a Saltire Shield. On the top is the Stafford Knot, either side is the Leek "Double Sunset" and below a gold garb. The crest is a mural crown with three Mulberry leaves on a Mount of Heather on top of which a Moorcock is resting his claw on a small-weave Shuttle. The motto 'ARTE FAVENTE NIL DESPERANDUM' translates to: Our skill assisting us, we have no cause for despair. 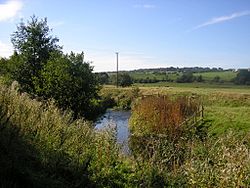 Most of the town is at or above 600 feet (180 m) and is surrounded by the higher countryside of the Staffordshire Moorlands which is situated on the southern uplands of the Pennines.

Leek is built on the slope and crown of a hill which is situated just a few miles south of the Roaches; a gritstone escarpment which rises steeply to 1,657 feet (505 m).

Many Victorian period, and older, buildings still stand in the town, many built by the family architectural practice of the Sugdens. In 1849 William Sugden (b. 1821 in Keighley) came to Leek. He was an architect and his work on the design of the railway stations for the Churnet Valley Railway brought him to the area. In the following year William’s son, Larner Sugden, was born. After schooling in Yorkshire, Larner returned to Leek in 1866 to be apprenticed to his father as an architect, and thus was formed the famous Sugden & Son (Architects), whose influence on the town was to be profound. The firm had offices in Derby Street. The building still survives, the ground floor now being occupied by Boots the Chemist. Larner was a great supporter of the Society for the Protection of Ancient Buildings, and so Leek’s development was in sympathetic hands. 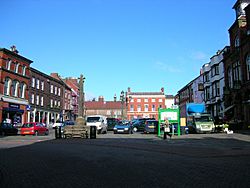 The architectural output from Sugden & Son was both prolific and varied. Some of the buildings designed by the Sugdens are as follows: the Congregational Church with its 130’ spire, (now Trinity Church), built in the Victorian Gothic Revival style (1863), Myatt’s Mill in Earl Street (1864), Mill Street Methodist Chapel and Ragged School (1870), the Cottage Hospital, in memory of silk manufacturer James Allsop (1871), their own houses in Queen Street, complete with monograms for William, Larner and for Larner’s French wife (1877), West Street School (extended in 1881), the District Bank, which exhibits a strong Richard Norman Shaw influence (1882) and the Leonard Street Police Station in Scottish Baronial style (1891). This last was probably the last joint venture of the father-and-son team because William Sugden died in 1892. 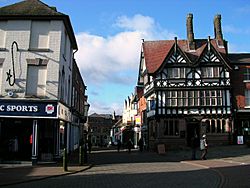 The Sugden masterpiece was, perhaps, the Nicholson Institute, built in the Queen Anne style, in 1882. The fact that this building is tucked away behind the 17th century ‘Greystones’ is a further indication of Larner’s regard for old buildings. Larner would not countenance demolition of the old building, and so, as the Nicholsons owned the land to the rear, that is where the Institute was built. Larner cleverly incorporated the busts of Shakespeare, Newton, Reynolds and Tennyson into the building representing 400 years of artistic and scientific achievement from the 16th to the 19th century and embracing literature, science, art and poetry.

In 1899 came the Technical Schools and the Co-operative Society Hall. Although the original town centre cattle market was demolished and replaced with a bus station and shopping centre in the 1960s, the new cattle market was built on the edge of town adjacent to the railway station. Later, this was one of the stations closed following Dr. Beeching's recommendations, and a supermarket (Morrisons) now stands on the site.

The Nicholson War Memorial was dedicated in 1925.

Leek offers some contemporary architecture, most notably the alterations and refurbishment to Trinity Church on Derby Street (2011) and new teaching building on Horton Street for Leek College (2013). 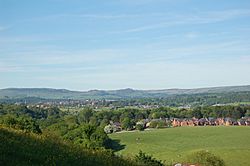 Leek with the Roaches behind

Nearby Rudyard Lake is a popular tourist attraction and home to the Rudyard Lake Steam Railway, running along its eastern shores. Other nearby local attractions are the local football club Leek Town F.C., Alton Towers, the cultural and leisure facilities of the city of Stoke-on-Trent, and the Peak District National Park. The Churnet Valley Railway at Cheddleton also attracts several thousand passengers a year, and they are currently working in partnership with Moorlands & City Railways to extend the CVR the 1 mile from its current northern terminus at Leekbrook back into Leek itself along the former North Staffordshire Line. Longer term plans include the development of a North Staffordshire museum alongside the new railway station, and a new canal marina.

Leek's "Double Sunset" on and around the summer solstice also attracts many tourists. This event, first recorded by Robert Plot, occurs when the sun sets behind the Cloud, subsequently partially reappearing in the hollow of the hill's steep northern side, before setting again. Plot's detailed account can be found in his book The Natural History of Staffordshire. Traditionally, the best location for seeing the double sunset was in the grounds of the parish church, but it is no longer visible from there. Currently, the best locations to witness the spectacle are from Lowe Hill, on the outskirts of the town, and from the private road to Pickwood Hall, off Milltown Way. The phenomenon and its possible observation points are described in detail in Jeff Kent's book, The Mysterious Double Sunset.

In May of every year, Leek Arts Festival takes place, celebrating the cultural heritage of the town. According to the festival's website, it began as a weekly event but soon expanded to last a whole month.

The surrounding countryside of the Staffordshire Moorlands and the Peak District makes the area a popular tourist destination. Just outside the town is Blackbrook Zoological Park, which is renowned for its large collection of birds. Also nearby is Coombes Valley RSPB reserve, an RSPB reserve since 1963, with walks and trails through a wooded valley.

The town of Leek is served by First with a regular number 18 bus service (or 16 on an alternative route via Cellarhead). There are also bus services to the nearby towns of Buxton and Macclesfield.

Plans are afoot to build a new station roughly half a mile south of the original, as part of bigger plans to develop the Barnfield area of Leek as a tourist attraction. The re-introduction of a railway service is being directed under the "Reconnect Leek" banner, and forms part of proposals to reopen the Stoke - Leek line which survived as a goods only line to serve the former sand quarry at Oakamoor.

All content from Kiddle encyclopedia articles (including the article images and facts) can be freely used under Attribution-ShareAlike license, unless stated otherwise. Cite this article:
Leek, Staffordshire Facts for Kids. Kiddle Encyclopedia.