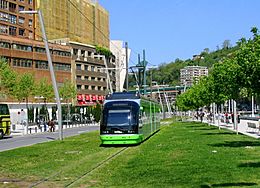 Grassed track on the EuskoTran in Bilbao

Tramway tracks are used on tramways or light railways. Grooved rails (or girder rails) are normally used to let the trams run on streets. This is called "street-running". Like normal rail tracks, tram tracks consist of two parallel steel rails.

Tram rails can be placed in several surfaces. Standard rails can be put on sleepers like railway tracks, or with grooved rails on concrete sleepers into street surfaces (pavement) for street running. Another environmentally-friendly or ecologically-friendly alternative is to lay tracks into grass turf surfaces. This is known as grassed track (or track in a lawn). It was first used in Liverpool in 1924.

All content from Kiddle encyclopedia articles (including the article images and facts) can be freely used under Attribution-ShareAlike license, unless stated otherwise. Cite this article:
Tramway track Facts for Kids. Kiddle Encyclopedia.