The Basingstoke Canal is a British canal, completed in 1794, built to connect Basingstoke with the River Thames at Weybridge via the Wey Navigation.

From Basingstoke, the canal passes through or near Greywell, North Warnborough, Odiham, Dogmersfield, Fleet, Farnborough Airfield, Aldershot, Mytchett, Brookwood, Knaphill and Woking. Its eastern end is at Byfleet, where it connects to the Wey Navigation. This, in turn, leads to the River Thames at Weybridge. Its intended purpose was to allow boats to travel from the docks in East London to Basingstoke.

It was never a commercial success and, from 1950, lack of maintenance allowed the canal to become increasingly derelict. After many years of neglect, restoration commenced in 1977 and on 10 May 1991 the canal was reopened as a fully navigable waterway from the River Wey to almost as far as the Greywell Tunnel. However its usage is currently still limited by low water supply and conservation issues.

The canal was conceived as a way to stimulate agricultural development in Hampshire. Following a Parliamentary Bill in 1778, problems raising the necessary capital funding meant that construction did not begin until 10 years later, in October 1788 and was completed on 4 September 1794. Engineer John Smeaton and his assistant William Jessop worked on the canal, along with Benjamin Henry Latrobe. One of the main cargoes carried from Basingstoke was timber.

In 1831 when plans for a railway from London to Southampton were again being developed the Basingstoke Canal company suggested instead that a link be built between the canal and the Itchen Navigation. The suggestion was rejected by those working on the plans and the canal company agreed not to oppose the railway.

The canal was never a commercial success and fell into disuse even before the construction of the London and South Western Railway, which runs parallel to the canal along much of its length. Commercial use ended in 1910 but low-level use of the canal continued.

During World War I the Royal Engineers took over the running of the canal and used it to transport supplies from Woolwich. The canal was also used to train soldiers in boat handling

Harmsworth later purchased the canal (in 1922) and ran a number of boats on it for a mixture of limited commercial carrying and pleasure cruising. The canal was sold upon his death in 1947 and by 1950 was in the hands of the New Basingstoke Canal Co Ltd. This company continued the restoration of the canal (under the management of the General Manager, Joan Marshall) but there was a serious setback in 1957 and a major breach in 1968. By the late-1960s it was essentially derelict despite volunteer efforts to improve the situation. 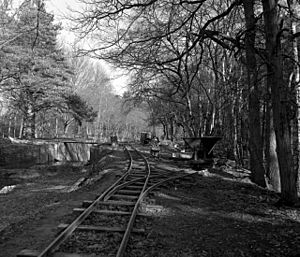 A light railway track installed on the towpath by volunteers, to aid restoration of the Deepcut Flight of locks.

In 1966, the Surrey and Hampshire Canal Society (now renamed the Basingstoke Canal Society) was formed by a group of local canal enthusiasts, with a view to reopening the derelict canal. They were instrumental in running a campaign that culminated in 1976 with the purchase of the canal by the County Councils of Hampshire and Surrey.

In February 1977 a job creation project started with the aim of carrying out restoration work on the Deepcut flight of locks. The work was coordinated with the work of the canal society who organised work parties at weekends while the job creation team worked on weekdays.

After about 18 years of restoration, 32 miles (51 km) of the canal were formally re-opened on 10 May 1991. The western section from North Warnborough to Basingstoke remains un-navigable from the point at which it enters the Greywell Tunnel. The tunnel partially collapsed in 1932 where it passes from chalk into clay geology, and is now inhabited by a protected bat colony making it unlikely that the tunnel will ever be restored. Some of the former canal basin at the western end has also been lost to modern development in and around Basingstoke.

The canal is now managed by the Basingstoke Canal Authority and is open to navigation throughout the year. Lock opening times are restricted due to the very limited water supply in an attempt to postpone summer closures which have plagued the canal since construction. Boat numbers are also limited to 1300 per year due to the fact that most of the canal has been designated a Site of Special Scientific Interest.

From the midpoint heading east large areas of heathland surrounds the canal which are habitats for reptilian species, such as vipers and lizards, and birds such as nightjars, woodlarks and Dartford warblers. Much of this heath survives today due to its use since the late 19th century as military training areas.

There is an information and visitor centre for the canal at Mytchett.

Two sections of the canal totalling 101.3 hectares (250 acres) are a Site of Special Scientific Interest and Nature Conservation Review site. These are the main length between Greywell and Brookwood Lye and a short stretch between Monument Bridge and Scotland Bridge in Woking. It is the most botanically rich aquatic area in England and flora include the nationally scarce hairlike pondweed and the nationally scarce tasteless water-pepper. The site is also nationally important for its invertebrates. There are 24 species of dragonfly and other species include two nationally rare Red Data Book insects.

Lost sections of the canal

The canal used to start from the centre of Basingstoke, but the last 5 miles (8 km) of the canal route have now been lost. This section of the canal fell into disuse after the closure of the Greywell Tunnel due to a lack of boat traffic, general neglect and a lack of water. There were no locks on this part of the canal after Ash and so the route generally followed the contours of the land with occasional cuttings, tunnels and embankments. The route can be partly determined by noting that the canal falls between the 75 m and 80 m contours on Ordnance Survey maps. The main source of water for the Basingstoke end of the top pound of the canal appears to have been the natural springs within the Greywell Tunnel - old ordnance survey maps (look at http://www.ponies.me.uk/maps/osmap.html) show the River Loddon running next to but not into the canal in Basingstoke (and a visit to Eastrop Way, on the former route of the canal, shows that it is now well above the height of the nearby river Loddon) and also show a lack of any water connection from the spring at Huish Farm near Hatch (a site visit shows the Huish stream flows under the remains of the old canal bed just next to the M3). There are however small streams flowing into the top pound of the canal at Fleet and Aldershot. An attempt to alleviate the lack of water is apparent by a small lock just to the east of the Greywell tunnel, which appears to have raised the water level by about 30 centimetres (1 ft). However this was a long section of canal with many embankments and it is likely that this was a cheap short term measure to keep the canal open, in preference to plugging the leaks from the many embankment sections on the route.

The canal started at a canal basin, roughly where the cinema in Festival Place is located. From there the canal ran alongside the River Loddon following the line of Eastrop Way. The old canal route passes under the perimeter ring road and then follows a long loop partly on an embankment to pass over small streams and water meadows towards Old Basing, where the route goes around the now ruined palace of Basing House and then through and around the eastern edge of Old Basing. Cuttings, which contain water in the winter are present through Old Basing, just off Milkingpen Lane and from the section running around farm land at the eastern edge of the village behind the Belle View Road/Cavalier Road estate. It followed another loop to go over small streams near the Hatch public house (a lot of this section was built over when constructing the M3) and headed across fields on an embankment towards Mapledurwell. The canal then headed towards a small tunnel under the Andwell Drove and then across another field partly on an embankment towards Up Nately. The section of the canal from Up Nately to the western entrance of the Greywell Tunnel still exists and is a nature reserve; there is water in the canal and the canal towpath can be walked. A permissive footpath at the western entrance to the tunnel allows walkers to access public footpaths to get to the eastern entrance of the tunnel.

The limit of navigation is about 500 m east of the Greywell Tunnel towards North Warnborough, although the section to the tunnel entrance is probably usable by canoes. The renovated sections of the canal can then be navigated east.

Plans to reconnect Basingstoke with the surviving section of the canal have been mooted several times in the past and this remains a long term aim of the Basingstoke Canal Society.

Another possible idea also considered was to connect the remaining canal to the Kennet and Avon Navigation near Reading. This link was proposed three times between 1793 and 1810, and a route was even surveyed by John Rennie in 1824, but following opposition from landowners was eventually rejected by Parliament in 1824 and 1826.

The canal is owned by both Hampshire County Council and Surrey County Council, with each authority owning the land within their jurisdiction. Until 1990, both councils managed their own sections separately. It was decided that a central body should manage the entire waterway and the Basingstoke Canal Authority was formed.

In 1993, the canal visitor centre was opened which now acts as the central offices of the Canal Authority.

The structure of the Canal Authority was last reviewed in 2011, with the two County Councils allocating client officers from their Countryside teams to lead the strategic direction for the canal, taking on part of the former Canal Director's role. The Canal Authority is now formed of one canal manager, a senior administration officer and assistant, visitor services manager and visitor services officer. The canal is maintained by a team of five canal rangers and one senior ranger, supported by a part-time seasonal lock keeper. 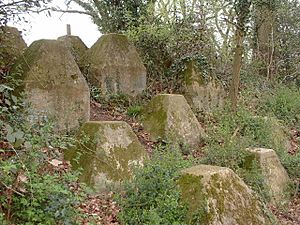 Dragons teeth at Crookham Wharf on the Basingstoke Canal

A notable feature of the canal is the large number of concrete bunkers known as pillboxes still visible along its length; these were built during World War II as part of the GHQ Line to defend against an expected German invasion.

Odiham Castle is situated at the Greywell (Basingstoke) end of the canal. The canal runs through part of the castle's bailey.

All content from Kiddle encyclopedia articles (including the article images and facts) can be freely used under Attribution-ShareAlike license, unless stated otherwise. Cite this article:
Basingstoke Canal Facts for Kids. Kiddle Encyclopedia.