Fleet is a town and civil parish in the Hart district of Hampshire, England, located 36 miles (58 km) southwest of London and 10 miles (16 km) east of Basingstoke. It is part of and is the major town of Hart District. The 2011 population (ONS census) for Fleet was 38,726.

In 2011, 2012, 2013, 2014 and again in 2015, Hart, of which Fleet is the main town, was voted the best place to live in the UK by the Halifax Quality of Life study, above areas such as Elmbridge in Surrey and Wokingham in Berkshire. This is due to the highly affluent majority of the population, better weather and health conditions, high levels of access to leisure space and the town's situation surrounded by countryside.

Fleet is locally famous for Fleet Pond, the largest freshwater lake in Hampshire and quaint High Street with traditional Victorian and Edwardian look and its market.

The town is located in the north-eastern part of Hampshire and is easily accessible from the M3 it is also home to a Welcome Break service station off the same name. 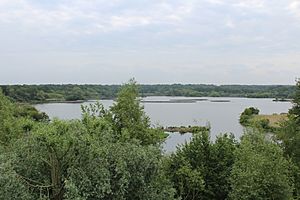 View of Fleet Pond. The railway line is about 100 metres to the left of the picture.

The site of Fleet was originally heathland in the northern part of the Crondall Hundred. The name Fleet was probably derived from the Norman French word La Flete meaning a stream or shallow water - a reference to the Fleet Pond from which fish had been taken for the monks in Winchester in Medieval times.

The area that was to become Fleet had shallow and sandy soil, much of it boggy or covered in gorse and bracken which held little attraction to agriculture and, compared to the chalk lands in the west of the county, the Fleet area has yielded few archaeological finds. Isaac Taylor's Map of Hampshire (1759) shows only three habitations in the area that was later to become Fleet.

In 1792 the Basingstoke Canal opened. The canal passed through the town site, but apart from a few inns to serve the passing trade it had little effect on the locality. Apart from the Farnham to Reading road, the site remained largely undeveloped until the construction of the London and South Western Railway, which opened in 1840. In that year a church - Christ Church that was to become the heart of the new ecclesiastical parish of Ewshot and Crookham was built midway between the villages of Crookham and Ewshot. This parish included the area that was to become the town of Fleet. The railway company promoted Fleet Pond for a destination for day excursions and many people came down from London to skate on the Pond during the winter. This attracted a number of gentry, particularly retired army officers, who moved to the area bounded by Fleet Road, Elvetham Road and Reading Road North and laid the foundations of what was to become known locally as "The Blue Triangle".

By 1860 Charles Lefroy, a local squire, commissioned All Saints' Church – in the Blue Triangle area in memory of his wife who had died in 1857. The architect was William Burges. The ecclesiastical parish of Ewshot and Crookam was split into two in 1862, with the northern section based on the All Saints' church becoming the new parish of Fleet. On 23 June 2015 the roof of All Saints' church was destroyed by fire in a suspected arson attack.

The development of Fleet accelerated when the land to the south east of the Blue Triangle was sold for development in 1882 which, unlike the Blue Triangle, was laid out in a grid pattern. Thus it is that there are few very old buildings in Fleet, with much of the modern town formed around Victorian buildings.

As in many parts of Britain, there was a building boom between the First and Second World Wars. Fleet also contains structures built in the 1960s such as the line of shops on the left of the picture below.

As part of the Hart District Council (1974 onwards)

Fleet has expanded in the past few decades with new residential areas being built at Ancells Farm, Zebon Copse (in neighbouring Church Crookham) and Elvetham Heath. Completed in 2008, Elvetham Heath is one of the UK's largest new housing developments, which has added some 3,500 inhabitants to Fleet's population, bringing its total population up to around 35,000, a 20% increase in less than a decade.

Two earlier developments in Fleet involved a double opening on 10 May 1991, the Hart Shopping Centre, which was opened officially by HRH The Duchess Of York and the Hart Leisure Centre on Hitches Lane (towards Church Crookham).

Although Fleet has traditionally been a dormitory town housing commuters to London, it now has several business parks, mainly occupied by Information Technology companies.

A plan to add a new multiplex cinema was abandoned; a gym was built on the proposed site instead.

Areas and suburbs of the town are Pondtail, Ancells Park and Elvetham Heath. The villages of Crookham Village and Church Crookham have also grown to be contiguous with the town. Immediately surrounding towns and villages include Winchfield, Dogmersfield, Crondall, Ewshot, and Hartley Wintney.

The Fleet Pond nature reserve is a notable beauty spot on the northern edge of the town. The 'pond' itself is in fact the largest freshwater lake in Hampshire, albeit very shallow. In times past, the lake has frozen over permitting skating. Fleet can be reached from London and Southampton via the M3 motorway, the nearest junction being 4A. Fleet services on the M3 lies at the edge of the town. Its main road, Fleet Road, runs through the town centre from south-west to north-east. Fleet railway station is on the Waterloo to Southampton main line; the train service is run by South West Trains. Journey time to Waterloo is about 50 minutes, express trains do the journey in under 40 minutes. There are small airports nearby at Blackbushe Airport and Farnborough Airfield. The Basingstoke Canal, built at the end of the eighteenth century, connected Fleet to Basingstoke and, in the other direction, London via the Wey navigation. By the early twentieth century, it had fallen into disrepair, but the section between the Wey Navigation and the Greywell Tunnel (midway between Fleet and Basingstoke) has since been restored by volunteers and is maintained as a leisure facility.

Along with the rest of South East England, Fleet has a temperate climate which is generally wetter and warmer than the rest of the country. The annual mean temperature is approximately 9 °C (48.2 °F) and shows a seasonal and a diurnal variation. January is the coldest month with mean minimum temperatures between 0.5 °C (32.9 °F) and 2 °C (35.6 °F). July is the warmest month in the area with average daily maxima around 21 °C (69.8 °F).

Fleet is served by Fleet railway station, on the London to Basingstoke line. The station recently underwent a large improvement project, funded mostly by Hampshire County Council giving the station a much needed expansion to car parking facilities and adding proper disabled access, bringing the station up to modern standards.

Fleet has strong local bus service, Fleet Buzz operated by Stagecoach bus has routes circulating the town and providing access to surrounding towns such as Farnborough and Aldershot.

Fleet has a half marathon commonly used in preparation for the London Marathon.

The Hart Leisure Centre is the primary local government-run sports and leisure centre in the town. It contains a 25-metre swimming pool, a teaching pool, large gym, two sports halls and a number of studios and squash courts. The leisure centre is also home to many high standard local sport and martial art clubs, who meet in the facilities, supported by the centre itself.

The town has numerous events organised by the local carnival committee, the largest being fleet Carnival, and the switching on of the Christmas lights as December approaches (known as Fleet Festivities), usually held the last Wednesday in November, taking place along the local high-street, which is pedestrianised for the evenings events. The committee also arrange food festival, attracting stands run by local restaurants and talks and demonstrations held in large marquees.

The area has various strong charity clubs one of which, the local Lions International club, run a Beer Festival and a Fireworks night every year.

Other yearly events in fleet includes a Half Marathon, Fleet 10K, and Elvetham Heath Car Show.

A market takes place every Saturday in Gurkha square, outside the Harlington Building (The local Entertainment venue and library).

All content from Kiddle encyclopedia articles (including the article images and facts) can be freely used under Attribution-ShareAlike license, unless stated otherwise. Cite this article:
Fleet, Hampshire Facts for Kids. Kiddle Encyclopedia.