Kids Encyclopedia Facts
This page is about the family of birds. For the aircraft, see Gloster Nightjar. For the cryptid sometimes called "goat sucker", see Chupacabra.

Nightjars are medium-sized nocturnal or crepuscular birds in the subfamily Caprimulginae and in the family Caprimulgidae characterised by long wings, short legs and very short bills. They are sometimes called goatsuckers, due to the ancient folk tale that they sucked the milk from goats (the Latin for goatsucker is Caprimulgus), or bugeaters, their primary source of food being insects. Some New World species are called nighthawks. The English word "nightjar" originally referred to the European nightjar.

Nightjars are found all around the world, with the exception of Antarctica and certain island groups such as Madagascar and the Seychelles. They can be found in a variety of habitats, most commonly the open country with some vegetation. They usually nest on the ground, with a habit of resting and roosting on roads.

The subfamilies of nightjars have similar characteristics, including small feet, of little use for walking, and long pointed wings. However, typical nightjars have rictal bristles, longer bills, and softer plumage. The colour of their plumage and their unusual perching habits help conceal them during the day.

Traditionally, nightjars have been divided into three subfamilies: the Caprimulginae, or typical nightjars with 79 known species, and the Chordeilinae, or nighthawks of the New World with 10 known species. The two groups are similar in most respects, but the typical nightjars have rictal bristles, longer bills, and softer plumage. Their soft plumage is cryptically coloured to resemble bark or leaves, and some species, unusual for birds, perch along a branch rather than across it, helping to conceal them during the day. The subfamilies of nightjars have similar characteristics, including small feet, of little use for walking, and long pointed wings.

The common poorwill, Phalaenoptilus nuttallii, is unique as a bird that undergoes a form of hibernation, becoming torpid and with a much reduced body temperature for weeks or months, although other nightjars can enter a state of torpor for shorter periods.

Subsequent work, both morphological and genetic, has provided support for the separation of the typical and the eared nightjars, and some authorities have adopted this Sibley-Ahlquist recommendation, and also the more far-reaching one to group all the owls (traditionally Strigiformes) together in the Caprimulgiformes. The listing below retains a more orthodox arrangement, but recognise the eared nightjars as a separate group. For more detail and an alternative classification scheme, see Caprimulgiformes and Sibley-Ahlquist taxonomy.

Also see a list of nightjars, sortable by common and binomial names. 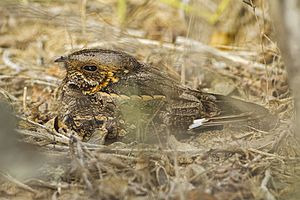 Nightjars inhabit all continents other than Antarctica, as well as some island groups such as Madagascar, the Seychelles, New Caledonia and the islands of Caribbean. They are not known to live in extremely arid desert regions. Nightjars can occupy all elevations from sea level to 4,200 m (13,800 ft), and a number of species are montane specialists. Nightjars occupy a wide range of habitats, from deserts to rainforests but are most common in open country with some vegetation. The nighthawks are confined to the New World, and the eared nightjars to Asia and Australia.

A number of species undertake migrations, although the secretive nature of the family may account for the incomplete understanding of their migratory habits. Species that live in the far north, such as the European nightjar or the common nighthawk, migrate southward with the onset of winter. Geolocators placed on European nightjars in southern England found they wintered in the south of the Democratic Republic of the Congo. Other species make shorter migrations.

Some species of nightjar are threatened with extinction. It has been suggested that road-kills of this species by cars are a major cause of mortality for many members of the family because of their habit of resting and roosting on roads.

They also usually nest on the ground, laying one or two patterned eggs directly onto bare ground. It has been suggested that nightjars will move their eggs and chicks from the nesting site in the event of danger by carrying them in their mouths. This suggestion has been repeated many times in ornithology books, but surveys of nightjar research have found very little evidence to support this idea.

Developing conservation strategies for some species presents a particular challenge in that scientists do not have enough data to determine whether or not a species is endangered due to the difficulty in locating, identifying and/or categorizing their limited number (e.g. 10,000) known to exist, a good example being the Vaurie's nightjar in China's south-western Xinjiang Province (as seen only once in-hand). Surveys in the 1970s and 1990s failed to find the species., implying that the species has become extinct, endangered, or found only in a few small areas.

All content from Kiddle encyclopedia articles (including the article images and facts) can be freely used under Attribution-ShareAlike license, unless stated otherwise. Cite this article:
Nightjar Facts for Kids. Kiddle Encyclopedia.