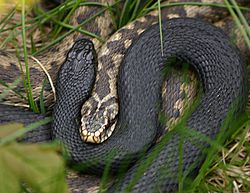 The Adder, Vipera berus is a venomous viper that can be found throughout most of Western Europe and all the way to Far East Asia. It is the only venomous snake in the British Isles.

They are not highly dangerous; the snake is not aggressive and usually only bites when alarmed or disturbed. Bites can be very painful, but they are rarely fatal. The snake is not threatened, though it is protected in some countries.

Unusual for snakes, the adder's sexes are possible to tell apart by the colour. Females are usually brownish with dark-brown markings, the males are pure grey with black markings.

The species has two morphs. The common pattern is the one with dark stripe with crossbars along the back, on a lighter body. The melanistic morph is very dark all over. The dark morph is more common in females. Where information is available, polymorphism seems to be maintained by natural selection. No information has been collected on its effect in adders.

The adder has a wide range. It can be found across Eurasian; from northwestern Europe (Great Britain, Scandinavia, Germany, France) across southern Europe (Italy, Albania, Croatia, Republic of Macedonia, Bulgaria, and northern Greece) and eastern Europe to north of the Arctic Circle, and Russia to the Pacific Ocean, Sakhalin Island, North Korea, northern Mongolia and northern China. In several European countries it is known as being the only native venomous snake.

The adder's diet is mainly small mammals such as mice, voles, shrews and even weasels and moles. Sometimes, they eat slow worms and lizards. They feed on amphibia, such as frogs, newts, and salamanders. There have been reports of adders eating birds, especially nestlings and eggs. Once they reach about 30 cm (1 ft) in length, their diet begins to resemble that of the adults.

All content from Kiddle encyclopedia articles (including the article images and facts) can be freely used under Attribution-ShareAlike license, unless stated otherwise. Cite this article:
Adder Facts for Kids. Kiddle Encyclopedia.