Farnborough is a village in south-eastern Greater London, England, located in the historic county of Kent. Situated south of Locksbottom, west of Green Street Green, north of Downe and Hazelwood, and east of Keston, it is centred 13.4 miles (21.6 km) southeast of Charing Cross.

Suburban development following the Second World War resulted in the area becoming contiguous with the conurbation of London. The area has formed part of the London Borough of Bromley local authority district since the formation of the ceremonial county of Greater London for administrative purposes in 1965.

The village name derives from Fearnbiorginga, meaning village among the ferns on the hill. Old records date from 862 when Ethelbert, King of Wessex, gave away 950 acres at Farnborough. The village was not included in the Domesday Book survey, but the manor existed in the Middle Ages and was held in the 13th century by Simon de Montfort.

The village evolved on the main road from London to Hastings which originally ran via Church Road and Old Hill (to the south of the village). The George pub existed in the 16th century and was used as a coaching inn. Coaches and horses were accommodated later.

Farnborough formed a civil parish in the Ruxley hundred of Kent. In 1840 the parish was included in the Metropolitan Police District. It was part of the Bromley rural sanitary district and went on to form part of the Bromley Rural District from 1894 to 1934. The parish was abolished in 1934 as part of a county review order, following the Local Government Act 1929, and its area was split between the Municipal Borough of Bromley (3 acres) and Orpington Urban District (1,426 acres). The entire area has formed part of the London Borough of Bromley in Greater London since 1965. The population of the parish was as follows:

On 30 March 2008, at about 14:40, a Cessna Citation 501 aircraft crashed into a house in Romsey Close, Farnborough. Five people, two pilots and three passengers, were aboard the aircraft. There were no survivors in the aircraft, but no casualties on the ground. The aircraft had taken off from Biggin Hill, on the way to Pau in south-west France. The aircraft was attempting to return to Biggin Hill when it crashed, shortly after the pilot had issued a Mayday call. Amongst those killed were Eurosport commentator and former Touring Car driver David Leslie and ex-Le Mans driver Richard Lloyd. An investigation has been launched by the Air Accidents Investigation Branch. 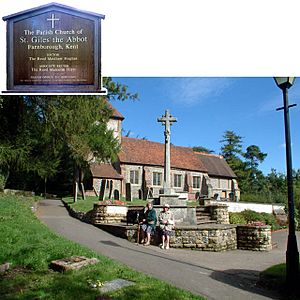 The main feature of Farnborough is Farnborough Village. The Princess Royal University Hospital at Locksbottom, near Farnborough (formerly Farnborough Hospital) has an accident and emergency department and specialised units. Farnborough was one of the main filming locations for Footballers' Wives.

The nearest National Rail station to Farnborough is Orpington, located 1.7 miles away.

Farnborough is served by London Buses routes 358 & R4. These connect it with areas including Beckenham, Bromley, Crystal Palace, Orpington & Penge.

All content from Kiddle encyclopedia articles (including the article images and facts) can be freely used under Attribution-ShareAlike license, unless stated otherwise. Cite this article:
Farnborough, London Facts for Kids. Kiddle Encyclopedia.