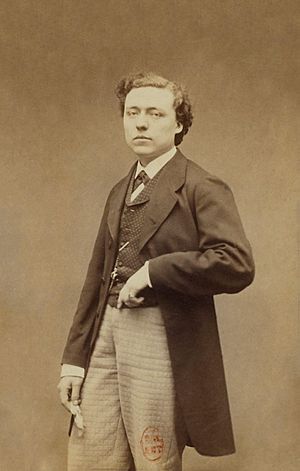 Louis Joseph Diémer (14 February 1843 – 21 December 1919) was a French pianist and composer. He was the founder of the Société des Instruments Anciens in the 1890s, and also gave recitals on the harpsichord. His output as a composer was extensive, including a piano concerto and a quantity of salon pieces.

Diémer was born and died in Paris. He studied at the Paris Conservatoire, where his teachers included Ambroise Thomas for composition, Antoine Marmontel for piano, and François Benoist for organ. From the age of twelve, he won several first prizes (Premiers Prix) at the Conservatoire, in piano, harmony and accompaniment, counterpoint and fugue, and solfège, and a second prix in organ.

He quickly built a reputation as a virtuoso and toured with, among others, the violinists Delphin Alard and Pablo de Sarasate.

In 1888, Diémer succeeded Marmontel as professor of piano at the Paris Conservatory. He taught, among others, Robert Casadesus, Alfredo Casella, Marcel Ciampi, Alfred Cortot, José Cubiles, Lazare Lévy, Robert Lortat, Yves Nat, and Édouard Risler. He was also instrumental in promoting the use of historical instruments, giving a series of harpsichord performances as part of the 1889 Universal Exhibition and contributing to the founding of the Société des Instruments Anciens. 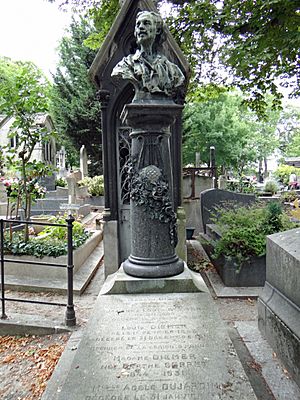 His grave in the Montmartre Cemetery.

Diémer was also among the earliest pianists to record for the gramophone. His recordings are said to show the best aspects of the 19th-century French piano school: clarity, point, and control in rapid, detaché passages and limpid pianissimo scales. They clearly attest to Diémer's title in the French press as "the king of the scale and the trill. They also give evidence to comments made by his pupil Lazare Lévy, who himself would become an influence on the French musical scene. Lévy wrote: "The astonishing precision of [Diémer's] playing, his legendary trills, the sobriety of his style, made him the excellent pianist we all admired".

All content from Kiddle encyclopedia articles (including the article images and facts) can be freely used under Attribution-ShareAlike license, unless stated otherwise. Cite this article:
Louis Diémer Facts for Kids. Kiddle Encyclopedia.