Carlos Vives was born on 7 August 1961 in Santa Marta, Magdalena, Colombia, where he spent his first 12 years of life. At that age, he and his family moved to Bogotá in search of a better life. He enrolled in Jorge Tadeo Lozano University and holds a degree in Advertising from the university. In Bogotá, he also acquired a taste for rock, getting involved in the local music scene, and started playing in bars and cafés around the city.

In 1982, Vives began acting in a number of shows and telenovelas including "Pequeños Gigantes" (Little Giants – 1983) and "Tuyo es Mi Corazón" (Yours is My Heart – 1985). He finally found fame in 1986 by playing the title role of Gallito Ramírez, which told the story of a Colombian Caribbean coast boxer who falls in love with an uptight girl, who was portrayed by his first wife, Margarita Rosa de Francisco. That same year, he released his first album, Por Fuera y Por Dentro. The album, primarily made of ballads, failed to gain any success. In 1987, he released his second ballad album, No Podrás Escapar de Mí. Though the title track reached No. 30 on the Billboard Hot Latin Tracks, the album did not sell well. His next album, Al Centro de la Ciudad, would become his last album to feature synthesizer-romantic ballads. Some of the songs got some attention being featured in telenovelas, but the album, just as its predecessors, failed to gain success.

In 1989, he was offered an acting job in Puerto Rico, and upon moving, he took a break in his music career. He is remembered for his leading roles in the soaps La Otra and Aventurera. He married Herlinda Gómez, his second wife (they have since divorced). Vives would spend his time between Colombia, Miami and the city of Mayagüez, Herlinda's hometown, during his marriage to her.

Upon his return to Colombia in 1991, he was offered a TV role that would change his life forever. He was cast in the leading role of a fantasy series based in the life of vallenato composer Rafael Escalona called, not surprisingly, Escalona. He sang the composer's songs in the series, and that's when he retooled his career towards vallenato, gaining national success with the release of the Telenovela's two soundtrack albums, Escalona: Un Canto a la Vida and Escalona: Vol. 2.

In 1993, backed by the band "La Provincia", Vives released the album Clásicos de la Provincia in which he started fusing Vallenato with rock, pop and other Caribbean Colombian ethnic rhythms. This fusion scandalized Vallenato purists. This style of vallenato was a huge success not only in Colombia but all over Latin countries, and the albums' lead single, La Gota Fría, became a hit all over Latin America. Clásicos de la Provincia, won the Billboard Latin Music Awards Best Album and would become a timeless classic in Colombian and Latin American music, introducing Vallenato to both Colombia and the rest of the world.

In 2009 he released the album Clásicos de la Provincia II, which was sold exclusively in Colombian supermarket chain "Almacenes Éxito." The album saw Vives' return to covering famous Vallenato songs in his own style. It sold massively and the single Las Mujeres received wide radio airplay in all Colombia. 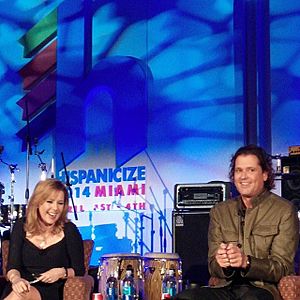 In 2012 Carlos Vives began a new era in television and music.

With more than 40 songs written in that year, the new album was released in April 2013 and featured 11 tracks. The first single, "Volví a Nacer", was released in September 2012 and went straight to No. 1 on Billboard. The second single, "Como Le Gusta a Tu Cuerpo" featuring Michel Teló was released in late January 2013. Carlos also graced the small screen for all Colombia to see when he joined fellow artists Ricardo Montaner, Fanny Lu, and Andrés Cepeda as one of the coaches for the first season of the vocal competition series phenomenon The Voice Colombia, which premiered October 2012 via Colombian TV network Caracol TV.

On 27 May 2016, "La Bicicleta" with fellow Colombian singer Shakira was released as a single. The video for the song was filmed in Colombia in each of their home cities. The song debuted at the number one spot on Billboard's US Latin Airplay chart and number four on the US Hot Latin Songs chart.

On 13 September 2018, Telemundo announced Carlos Vives as the fourth coach of La Voz (U.S.). Vives joins Luis Fonsi, Alejandra Guzman and Wisin as coaches on the Spanish-language version of NBC singing-competition The Voice.

Vives was married to the famous Colombian actress Margarita Rosa de Francisco in a relationship that was closely followed by the national media. Herlinda Gómez was his second wife with whom he had two children: Carlos Enrique Vives and Lucía Vives. He is now married to former Miss Colombia Claudia Elena Vásquez and they have two children: Elena Vives, and Pedro Vives. He spends his time between Miami and Colombia, mainly Santa Marta and Bogotá.

The Grammy Award is an accolade by the National Academy of Recording Arts and Sciences of the United States to recognize outstanding achievement on the music industry. Carlos Vives has won two awards out of five nominations.

A Latin Grammy Award is an accolade by the Latin Academy of Recording Arts & Sciences to recognize outstanding achievement in the music industry. Carlos Vives has won eleven awards from twenty two nominations.

A Premio Nuestra Tierra is an accolade that recognize outstanding achievement in the Colombian music industry. Carlos Vives has received five awards from eleven nominations.

The World Music Awards is an international awards show founded in 1989 that annually honors recording artists based on worldwide sales figures provided by the International Federation of the Phonographic Industry (IFPI).

All content from Kiddle encyclopedia articles (including the article images and facts) can be freely used under Attribution-ShareAlike license, unless stated otherwise. Cite this article:
Carlos Vives Facts for Kids. Kiddle Encyclopedia.