Raised in Colombia, Juanes began playing guitar at age seven. When Juanes was fifteen, he started his first band, Ekhymosis, in 1988, which went on to release five albums, achieving recognition in his native country of Colombia. In 1997 after the band broke up, Juanes continued solo and in 2000 he released the album, Fíjate Bien, which earned him three Latin Grammys. His follow-up album, Un Día Normal, was released in 2002 and was later certified platinum in multiple countries throughout Latin America.

According to his label, Universal Music, Juanes has won, among others, twenty Latin Grammy Awards and two Grammy Awards. Juanes received the BMI President's Award at the 2010 BMI Latin Awards.

Movies can now be added to Juanes career, with his contributions to the recent animated film Ferdinand. In that production, he both wrote the original score "Lay Your Head On Me" and played the voice of Juan (Nina's father).

Juanes is also known for his humanitarian work, especially with aid for Colombian victims of anti-personnel mines through his NGO Fundacion Mi Sangre. On April 2013, Juanes released an autobiography titled Chasing The Sun in which he tells his story through narratives and pictures. 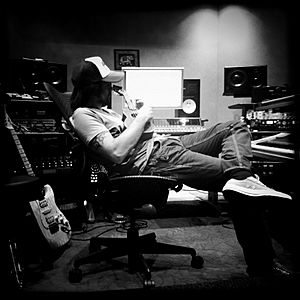 Juanes in the studio with his Ukelele 2012

Juanes was born in Carolina del Príncipe, Antioquia, Colombia. When he was seven years old, his father and brothers began to teach him how to play guitar. His passion for the instrument led him to discover simple genres of music such as traditional sounds such as tango and Vallenato, as well as Russian folk music. As a teenager, Juanes was greatly influenced by rock and metal acts such as The Beatles and Metallica.

He grew up in Medellín during the height of Pablo Escobar's reign, when the city had the highest homicide rate in the world. During his childhood, Juanes witnessed a civil war in which hundreds were killed. His cousin was killed by kidnappers, and gunmen also executed a close friend. To add further to Juanes' grief and desperation, his father died from cancer. This period shaped Juanes' social consciousness, saying "Colombia has suffered so much that the only way to go forward is to imagine a better country." 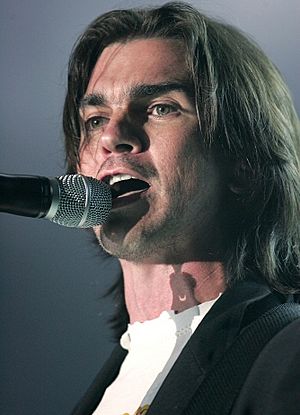 Juanes in concert at the Chumash Casino Resort in Santa Ynez, California 2006

Juanes met model/actress Karen Martínez during the filming of his video "Podemos Hacernos Daño". On August 6, 2004, they were married. The couple separated in May 2007, after three years of marriage, but reconciled four months later. They have three children together, two daughters and one son.

Juanes is a vegetarian and currently lives in Key Biscayne, Florida.

All content from Kiddle encyclopedia articles (including the article images and facts) can be freely used under Attribution-ShareAlike license, unless stated otherwise. Cite this article:
Juanes Facts for Kids. Kiddle Encyclopedia.