Latin rock is a term to describe a music subgenre. It has traditional sounds and elements of Latin American and Caribbean folk music merged with with rock music. However, it is widely used in the English-language media to refer any kind of rock music featuring Spanish or Portuguese vocals. 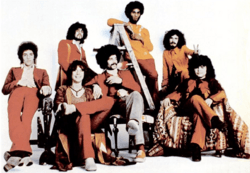 The archaetypal latin rock band was led by Carlos Santana. His band Santana was far and away the most popular latin rock fusion of the late 1960s to the early 2000s. Santana has sold more than 90 million records worldwide, making them one of the world's best-selling groups of all time.

In 1969, after the release of the debut album by Santana, Latin rock appeared in the US and other parts of the world. The band's musical style is a fusion of Latin American and Caribbean rhythms, soul, jazz, funk, blues, psychedelia and rhythm and blues based on rock music.

Equally important to their success was the use of English lyrics. In the United States of fifty years ago, to sing in Spanish was to limit the audience to Puerto Rican, Mexican and Cuban immigrants. To sing in English was to open up the chance of really wide popularity.

All content from Kiddle encyclopedia articles (including the article images and facts) can be freely used under Attribution-ShareAlike license, unless stated otherwise. Cite this article:
Latin rock Facts for Kids. Kiddle Encyclopedia.