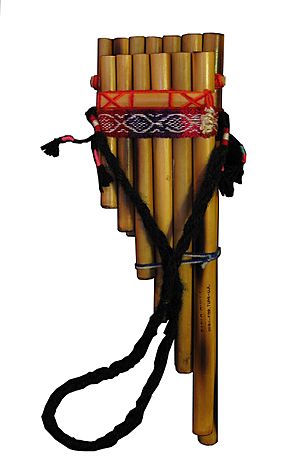 The pan flute or pan pipe (also known as panflute or panpipes) is an old musical instrument that has five or more pipes of gradually increasing length (and, at times, girth). The pan flute has been a folk instrument, and is considered the first mouth organ, ancestor of both the pipe organ and the harmonica.

All content from Kiddle encyclopedia articles (including the article images and facts) can be freely used under Attribution-ShareAlike license, unless stated otherwise. Cite this article:
Pan flute Facts for Kids. Kiddle Encyclopedia.