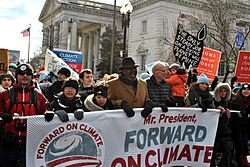 350.org is an international environmental organization. It was started by author Bill McKibben, with the goal of building a global grassroots movement to fight against global warming and the climate change denial [en] of global warming. However the main goal is to lower the emissions of carbon dioxide and other greenhouse gases in order to avoid climate change problems.

The name 350.org comes the research of scientist Dr. James Hansen. He wrote in a scientific paper in 2007 that the level of carbon dioxide (CO2) in the atmosphere should not be higher than 350 parts-per-million (ppm). According to scientific research this is a safe maximum to avoid a climate tipping point.

350.org works with over 300 other organizations around the world. It has had people supporting the organization as "messengers". Among them are Archbishop Desmond Tutu, Alex Steffen, Bianca Jagger and David Suzuki. Van Jones and Gus Speth are on 350's U.S. Advisory Council. 350.org has a Board of Directors.

350.org is strongly against the Keystone XL pipeline project. The pipeline is currently being built to transport tar sand oil from Canada through the United States to oil refineries in the Gulf of Mexico. NASA climatologist James Hansen described the Keystone XL pipeline as "game over" for the planet, and called the amount of carbon stored in Canadian tar sands a "fuse to the largest carbon bomb on the planet".

350.org wants colleges and universities, as well as cities, religious institutions, and pension funds to withdraw their investments from fossil fuel companies. They propose the money should rather be invested in sustainable companies.

"If it is wrong to wreck the climate, then it is wrong to profit from that wreckage. We want institutions to immediately freeze any new investment in fossil fuel companies, and divest from direct ownership and any commingled funds that include fossil fuel public equities and corporate bonds within 5 years."

Do The Math: The Movie

The Do The Math movie is a 42-minute documentary about the movement, the science behind the climate crisis and how to end the age of fossil fuels.

The organization's efforts continued into 2012 with a Climate Impacts Day on May 5th of worldwide series of rallies under the slogan "Connect the Dots," to draw attention to the links between climate change and extreme weather.

All content from Kiddle encyclopedia articles (including the article images and facts) can be freely used under Attribution-ShareAlike license, unless stated otherwise. Cite this article:
350.org Facts for Kids. Kiddle Encyclopedia.