James Edward Hansen (born 29 March 1941) is an American professor formally directing the Program on Climate Science, Awareness and Solutions of the Earth Institute at Columbia University. He is best known for his research in climatology, his 1988 Congressional testimony on climate change that helped raise broad awareness of global warming.

He participated in the NASA graduate trainee-ship from 1962 to 1966 and, at the same time, between 1965 and 1966, he was a visiting student at the Institute of Astrophysics at the University of Kyoto and in the Department of Astronomy at the University of Tokyo. Hansen then began work at the Goddard Institute for Space Studies in 1967. 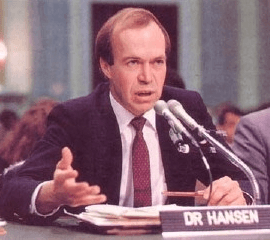 After graduate school, Hansen continued his work with radiative transfer models, attempting to understand the Venusian atmosphere. Later he applied and refined these models to understand the Earth's atmosphere, in particular, the effects that aerosols and trace gases have on Earth's climate. Hansen's development and use of global climate models has contributed to the further understanding of the Earth's climate. In 2009 his first book, Storms of My Grandchildren, was published. In 2012 he presented a 2012 TED Talk: Why I must speak out about climate change.

From 1981 to 2013, he was the head of the NASA Goddard Institute for Space Studies in New York City, a part of the Goddard Space Flight Center in Greenbelt, Maryland. As of 2014, Hansen directs the Program on Climate Science, Awareness and Solutions at Columbia University's Earth Institute. The program is working to continue to "connect the dots" from advancing basic climate science to promoting public awareness.

As a college student at the University of Iowa, Hansen was attracted to science and the research done by James Van Allen's space science program in the physics and astronomy department. A decade later, his focus shifted to planetary research that involved trying to understand the climate change on earth that will result from anthropogenic changes of the atmospheric composition.

Hansen has stated that one of his research interests is radioactive transfer in planetary atmospheres, especially the remote sensing of the Earth's atmosphere and surface from satellites. Because of the ability of satellites to monitor the entire globe, they may be one of the most effective ways to monitor and study global change. 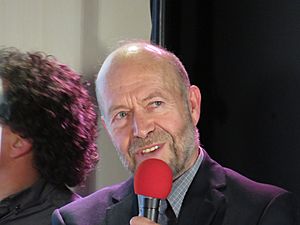 Hansen retired from NASA in April 2013 after 46 years of government service, saying he planned to take a more active role in the political and legal efforts to limit greenhouse gases. The same month, the National Center for Science Education, an organization noted for defending the teaching of evolution in United States science classrooms, named Hansen as an adviser.

Hansen was elected to the National Academy of Sciences in 1996 for his "development of pioneering radiative transfer models and studies of planetary atmospheres. During his career he won many outstanding awards in relation to global warming and his research.

All content from Kiddle encyclopedia articles (including the article images and facts) can be freely used under Attribution-ShareAlike license, unless stated otherwise. Cite this article:
James Hansen Facts for Kids. Kiddle Encyclopedia.