Peter Henry Fonda (February 23, 1940 – August 16, 2019) was an American actor. He was the son of actor Henry Fonda. He was the father of actress Bridget Fonda and brother of actress Jane Fonda. Fonda is most famous for 1969 movie Easy Rider. He co-wrote and co-starred in the movie with his friend Dennis Hopper. He rode a motorcycle in Easy Rider, and also in the earlier The Wild Angels, where he played an outlaw biker.

He appeared in many other movies, including Ulee's Gold in 1997, which earned him an Academy Award nomination, Burnett Stone in Thomas and the Magic Railroad and Frank O'Connor, husband of writer Ayn Rand, in The Passion of Ayn Rand.

Fonda appeared many times on talk shows, discussing his life and times, including his family life. Fonda died of respiratory failure on August 16, 2019 at his home in Los Angeles. He was 79 years old.

Fonda wrote an autobiography, Don't Tell Dad: A Memoir, which was published in 1998.

Fonda had had a permanent home in Paradise Valley, Montana since 1975. 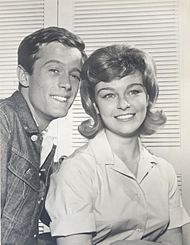 with Patty McCormack guest starring in The New Breed, 1962.

All content from Kiddle encyclopedia articles (including the article images and facts) can be freely used under Attribution-ShareAlike license, unless stated otherwise. Cite this article:
Peter Fonda Facts for Kids. Kiddle Encyclopedia.